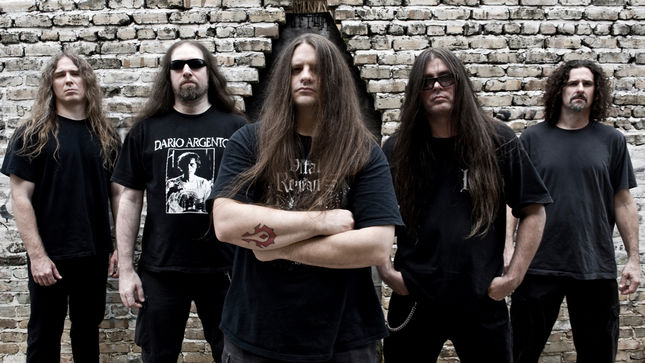 Cannibal Corpse are in the midst of the Summer Slaughter tour and drummer Paul Mazurkiewicz talked to the Phoenix New Times about the tour and other topics including the formation of death metal and whether it was a reaction to mainstream metal.

“Well, we were just making it heavier, really. Thrash was so prominent at that point, and exactly — right around '87, '88, '89, you got bands like Death and Morbid Angel and Autopsy and other heavier bands that are pushing the limits of thrash. Yeah, it's slightly thrash but it's heavier — what is this? This heavier vocal style and all that. When you listen to the first Cannibal demo though, we sound like Kreator. We were still kind of finding our identity. [First Cannibal Corpse singer Chris Barnes] sounds like the singer from Kreator on that demo. Then you fast forward to only eight months later when we recorded, the album doesn't sound that way. We were more influenced by the death-metal style vocals at that point.

Billed as “The Most Extreme Tour Of The Year!”, this year's edition of The Summer Slaughter Tour takes place between July 23rd and August 21st and will feature Cannibal Corpse (pictured above), Nile, After The Burial, Suffocation, Carnifex, Revocation, Krisiun, Slaughter To Prevail and Ingested, with more to be announced. A video trailer for the tour can be found below.