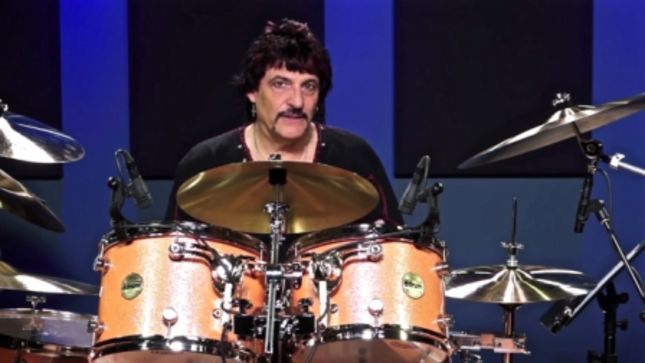 Greg Schmitt of WESU’s syndicated radio show Noize In The Attic recently spoke with drum legends Carmine and Vinny Appice. Together they discuss Carmine’s history and renewed involvement with Vinnie Vincent, Vinny’s relationship with John Lennon and much more!

“When I heard him with Vinnie Vincent Invasion, it wasn’t the same Vinnie.  It was like - I don’t know what he was trying to be, like an Yngwie or something...  He’s beyond that.  He’s a much better player than that.  He’s like John Sykes.  John Sykes can play all that stuff, but you don’t play it all the time.  You mix that up with a bit of blues and soul, and just great rock & roll like Jeff Beck or Clapton or those kind of guys.  And he can play that stuff. So, when I heard that album, and the mix and guitar was was so loud you couldn’t even hear the rest of the band, so I was a little disappointed in that album, ya know?

Vinny on playing with John Lennon:

“We’re rehearsing, John walks in, watches us play, he sits down on a step...  And he started hanging out with us.  We’re playing pool with him, and smoking joints and stuff.  He always wanted coke, though.  We didn’t have coke...  So we would up doing three videos with him … And then we did a live gig he asked us to do.  And then I found out a couple of years ago that was his last live gig. Ever.”

Listen to the full interview below: (starts at 12 minutes)

Former KISS guitarist Vinnie Vincent's dates in Memphis, Tennessee on December 7th and 8th have been postponed until February 8th and 9th in Nashville, Tennessee due to additional scheduling and logistical requirements by the promoter. Promoter Derek Christopher announced, "Vinnie is ready to rock and roll and is disappointed by the postponement, but we needed extra time to add and confirm additional guests for the show. We wanted to make sure it's done right."

​With the announcement of the new dates, it was also announced, "We are pleased to announce Vinnie will have an All-Star band in February that'll include Carmine Appice (Vanilla Fudge, Rod Stewart, Jeff Beck, Blue Murder) on drums, and Tony Franklin (David Gilmour, Jimmy Page, The Firm) on bass. More special guests will be announced soon."