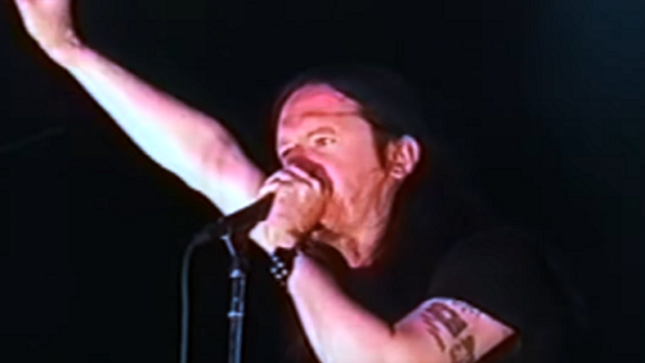 Cathedral vocalist Lee Dorrian and guitarist Gaz Jennings have recently been trolling through their archives and are in the process of getting some old 8mm, Video 8, VHS and Mini DV clips transferred. A lot of this cool stuff will be added to the Cathedral YouTube channel in the coming months. A wonderful sampling is available to enjoy below.

"Here's one from the time Jimmy Bower (Down / Eyehategod) joined us onstage for a rendition of Saint Vitus classic: 'White Magic / Black Magic'. Doom or be Doomed!" This clip was recorded at the Atak club in Enschede, Netherlands on November 25, 1995.

"Rare interview / live clip (featuring 'Electric Grave') from Redemption TV UK." It was filmed at the Camden Underworld on October 14, 2005.

"Here is Cathedral as featured on the Gods of Grind MTV Headbangers Ball special. Griff and Lee are interviewed by Mille Petrozza from Kreator, followed by a live performance of 'Soul Sacrifice'." Filmed at Tor 3 in Düsseldorf, Germany on March 24, 1992.

"Something for the weekend: Cathedral at Loud Park 2006. A great time was had by all!" Filmed October 14, 2006 at Makuhari Messe in Chiba City, Japan.