CHILDREN OF BODOM Frontman ALEXI LAIHO - "MARK KNOPFLER Is Fucking Awesome; I Suppose I Could Cover DIRE STRAITS, But Not For The Sake Of Doing Something Funny" 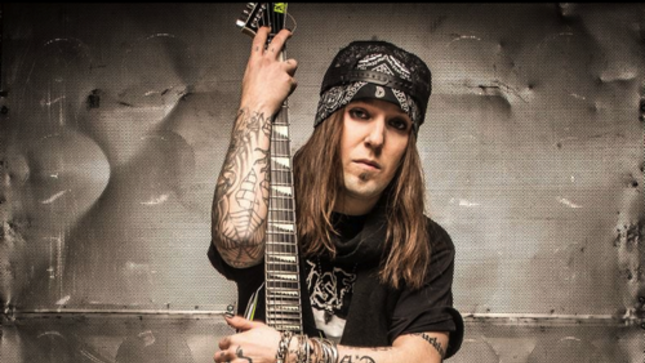 Children Of Bodom frontman Alexi Laiho recently spoke with Lords Of Metal about a number of topics including the band's forthcoming album, due in September, mellowing out of party mode on the road, and cover songs. An excerpt is available below.

Q: Who inspired you to move to guitar?

Laiho: "Well, I was four years old when my dad had a record of Dire Straits, ‘Money For Nothing’, which I thought sounded amazing. That is pretty heavy when you are four Fuck yeah, dude, it still sounds heavy when I hear it."

Q: Shouldn’t you do a cover version of the Dire Straits, then?

Laiho: "I kinda loved touching Britney Spears; Mark Knopfler on the other hand... now you see what the main difference is (laughs with the biggest smile of today). Seriously though, Mark Knopfler is fucking bad-ass, he’s fucking awesome, nothing but respect for him. I suppose I could cover them, but I won’t. At least not for the sake of doing something funny."

Q: Do you keep on doing that, the funnier cover songs, for the coming record?

Laiho: "Maybe we do covers, we love doing covers, but we are not going to do anything like Britney Spears again, we did it once and it was fucking hilarious, but we just leave it alone and do something else now. Cause right now, it wouldn’t make sense to try and top that. But we had fun with it."

Children Of Bodom are currently busy recording ten new tracks for the band's forthcoming, ninth album release in their own studio in Helsinki. The band took some time out to report from the recording desk and give fans an update on the sessions.

The band's summer tour schedule is as follows: