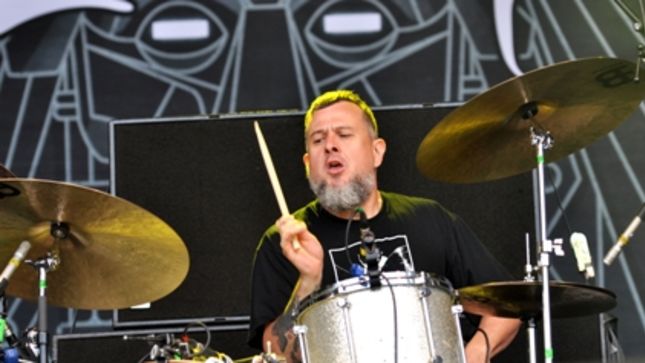 The clip below features Clutch drummer Jean-Paul Gaster running down his five favorite drummers, including John Bonham of Led Zeppelin and Bill Ward of Black Sabbath.

Q: The last two albums Psychic Warfare and Earth Rocker have a more intense, high energy feel than previous Clutch records. Were you looking to change up the sound or did that just evolve naturally?

A: “Well, I think Psychic Warfare definitely follows Earth Rocker in the kind of momentum that we started with that album. But when we went to Earth Rocker, I think we just found that it was more challenging to play faster. We have a comfort zone of about 110 beats per minute and I think to grow and to stay interested you have to challenge yourself and the easiest way to do that was to up the tempos.”

Q: How would you compare Psychic Warfare to some of your earlier work like the self-titled album?

A: “I’d like to think that we've become better songwriters. We come from a hardcore and heavy metal background and I think that at the onset we kind of stuck our noses at the original composition but I think now we kind of understand that we did a lot better to manipulate it. Maybe we've learned something in the past 20 years.”

Clutch recently scored some high chart positions with their 11th studio album, Psychic Warfare, landing on six Billboard charts. Weathermaker Music, the band’s self owned label, sold over 25,000 copies of the new album in the first week of release. The album came in at #11 on the Billboard Top 200 chart, the toughest chart to crack. Psychic Warfare is the highest debut charting album for Clutch and Weathermaker Music to date. The album landed at #1 on Billboard’s Rock and Hard Rock charts respectively. The full list, including International charting is below:

Psychic Warfare was produced by longtime producer Machine (Lamb Of God, Every Time I Die) and consists of 12 new tracks.