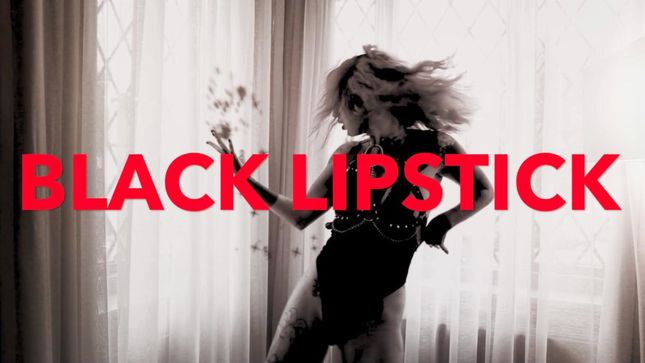 Combichrist guitarist Eric13 has revealed a new video for his latest solo track, “Black Lipstick,” the first in a series of singles over the next six months.

The video for “Black Lipstick” was created while in lockdown, across three cities in two different countries. Directed and edited by Eric13’s former Sex Slaves bandmate Del Cheetah in Las Vegas, actress Tink’s parts were filmed in Reading, England, while Eric13 himself was at home in Philadelphia.

“It was definitely a challenge to plan and execute a video when none of us could be together,” Eric13 says. “It required a lot of trust to bring together our different artistic elements. I’ve never met Tink, but she has this incredible magic that jumps off the screen. Photos of her inspired the entire video and artwork for the song itself. She is like no one or anything I’ve ever seen. The recording was already complete, yet she is the song, and the song is her.”

The independently released single and video were financed completely with the assistance of Eric13’s Patreon supporters.

The digital “Black Lipstick” single, which was written and performed by Eric13 with former Filter guitarist and producer Oumi Kapila, is available now here.

“I was basically on tour for five years straight,” Eric13 says. As a member of Combichrist since 2014, the guitarist has played nearly 500 shows in 35 countries, with solo acoustic rock shows in Europe and the United States wedged in between tours. “I’ve been writing new songs steadily the entire time, but I was playing live so much that I never had time to properly record and release my new music.  ‘Black Lipstick’ is step one. Now I wanna open the flood gates.”