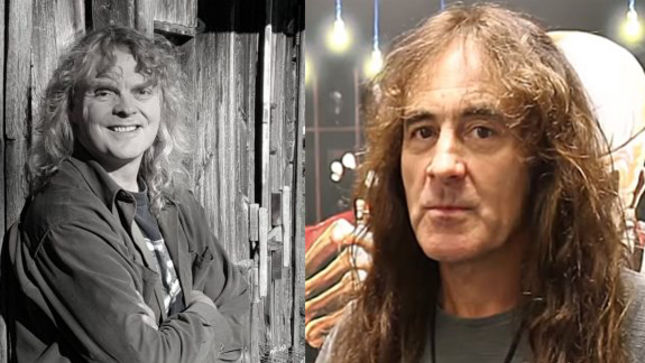 Canada's The Metal Voice recently spoke to vocalist, guitarist and motivational speaker Carl Dixon from the Canadian band Coney Hatch, who will be opening up for Iron Maiden bassist Steve Harris' British Lion on their upcoming Canadian tour in November. Listen below.

Dixon spoke about the bands albums, touring with Judas Priest, Krokus, Accept and Iron Maiden in the 80's, as well as their plans for the upcoming Canadian tour 2018 with British Lion.

On opening and touring with Judas Priest on the Screaming For Vengeance tour: "In 1982 on our debut album we got the call to go to Quebec City for the Judas Priest tour, we arrived there and were excited, it was such a big deal for us. We did about 25 - 27 shows with Judas Priest. For us it was like our Rock University, going on a big tour across the country and seeing how the established guys did it every night and we learned a lot from watching them. That tour was very important to our musical education. it also gave us the confidence, that helped us believe we could make it in the music industry."

On opening for Iron Maiden on their Piece Of Mind Tour in 1983: "This was Iron Maiden's first time being established as a headliner in North America, but I tell you there were still places that they weren't established as a headliner on that tour it was still in the building process. I remember there were a couple of dates, Kalamazoo, Michigan, maybe Erie, Pennsylvania. I remember the attendance was not very good and a couple of those places the manager gave the promoter back some of the money, so that they would have a good future relationship and do a show with them next time around. In Fargo North Dakota they just cancelled the show because there were not enough tickets sold."

On touring with Accept and Krokus in 1985 "Accept were sort of odd guys, Udo was a neat guy and he loved camouflage stuff and Coney Hatch bassist Andy Curran got him a camouflage ball point pen for autographs and Udo loved Coney Hatch after that. The band were really good guys we really didn't get to know them too well, they sure were heavy and they sure were tight, they were like the Scorpions but without the major hits. Krokus on the other hand treated us like we didn't exist and we were an annoyance in their universe they weren't very friendly, good thing they weren't the headliners. The thing with Krokus I remember looking at their set list and it was about 50% cover songs. They decided to record covers to get hits and that bugged me. It was very disappointing to met them and see how they acted, today I feel like it just wasn't just our band that felt that way."

On the upcoming tour with Steve Harris' British Lion and how that came about: "We have stayed in touch with Steve Harris all these years, Andy Curran is close friends with Steve all through the years they have become tennis buddies when Steve came to town. I know Andy has visited Steve in England a couple of times. Andy kept the closest relationship. Iron Maiden was on their last tour, Andy went out to visit and Steve said 'I would really love to bring my British Lion band to Canada for a tour because we have never been, how can we pull it off'. Steve said, 'what if we do some shows with Coney Hatch and do a double bill?' So that is how it really began. Took about a year and a half for it to fall in place. We are sharing the crews, we are sharing the travel, we will be riding VIA rail train cars together between the towns, it's going to be fun. Steve Harris is a great great guy, he is just as nice as you think he would be from the public appearances."