CORNERS OF SANCTUARY Tease New Single “Children Of The Night” 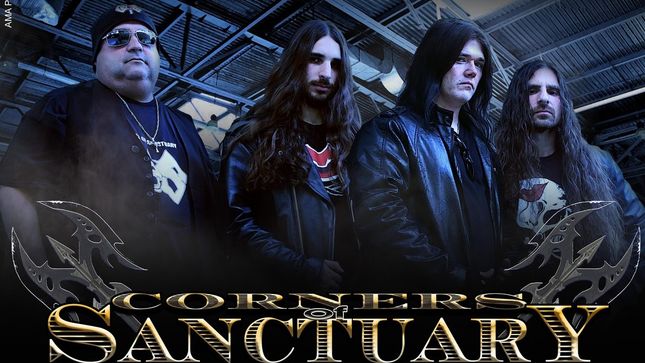 Corners Of Sanctuary (COS) have released a short video promoting their new and upcoming single “Children Of The Night.”:

The preview comes on the heels of the band recently being named Rockwired Magazine’s (US) “Best Band” and winning “Album of the Year” after taking seven nominations in the publication’s Annual Readers’ Poll. The announcement was made earlier this month.

“We owe this one to the fans,” said COS bassist James Pera. “Without their support it would have never happened,” he continued.

“Children Of The Night” includes an instrumental introduction titled “Beware.” The single was mastered by L.A. producer Bill Metoyer (Slayer, Armored Saint, Fates Warning), who had worked with the band on last year’s album The Galloping Hordes. This latest COS’ track features native New Jersey singer Ryan Michael on lead vocals. Michael will be joining COS on their upcoming live performances, with the first show scheduled on March 2nd in Philadelphia. The band plans to release additional studio work with Michael later this year.

The new single and music video will be officially released in March.

Corners of Sanctuary will be appearing with singer former Vixen singer Janet Gardner in late March, with former Iron Maiden frontman Blaze Bayley in April, and perform this May at the 2019 Finger Lakes Metal Fest in New York. COS is already making plans to head back out on another West Coast tour this September and are scheduled to perform at the legendary Whiskey A Go-Go with the Iron Maidens.

“We are really looking forward to our upcoming shows,” said COS guitarist Mick Michaels. “It’s been a couple of months since we last played live, so we are ready to go… We’ve been working on a new album… our goal this year is to focus heavily on that…so we plan to do a lesser number of live shows but ones with a little more of a punch to them.” he added.

A new Corners of Sanctuary studio album is being planned for release in early 2020.