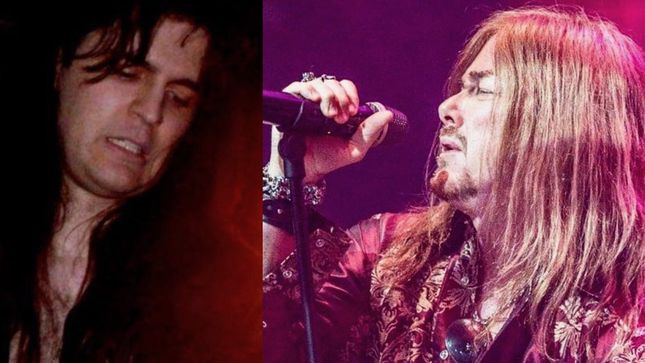 Costas Varras featuring Mark Boals will release the new single, "Rock You Hard", on December 3 via Lion Music. The single will be available on limited edition CD as well as streaming/download. A lyric video for the song can be found below.

Costas Varras was asked, who is Costas, what have you done musically before?...

"I’m a guitarist, songwriter & a band leader. My musical style is a blend of metal & cassical music. I was born in Athens, Greece in 1983. I started playing guitar when I was about 12 years old and by age 13 I started taking guitar lessons at a conservatory in Athens. I spent 12 years in education for music and in 2008 I graduated from Musicians Institute in Hollywood CA. I started playing shows with my band in Athens in 2001 and in 2006 I moved to Los Angeles to pursuit my career! In 2001 I had a self release Demo (7 tracks) under the name of “Perpetual” which was also my band’s name. In 2004 Sonic Age Records released my first solo album Overlord’s Perpetual. In 2009 I went to Kent, England to record my second solo album with legendary Producer Chris Tsangarides. These recordings were never released though. Years later in 2015 i worked again with my old time friend Bob Katsionis on new music and in 2018 Symmetric Records finally released Costas Varras’s second solo album entitled Neon-Classical. At the moment I am working on my 3rd album and now your label is going to release my new single featuring the great American singer Mark Boals.

"I love metal & rock music since 1991. I grew up listening bands like Metallica, Megadeth, Pantera, Black Sabbath, Manowar, Stratovarius, Rainbow, Dio, Iced Earth, Van Halen, Ozzy Osbourne, W.A.S.P., and many other famous and underground bands. My favourite artist thought was and still is Yngwie Malmsteen! I listen to other guitar players as well... like: Joe Stump, Paul Gilbert, Marty Friedman, Randy Rhoads, Scott Henderson, Frank Gambale, Steve Vai and others. On that point I have to mention that during the years I explored other styles of music as well like: classical music mainly baroque, jazz rock fusion, blues, modern RnB and pop.

"I’m planning to release my 3rd solo album and then later on to go on tour in Europe, North America and Japan! I’m already talking with two booking agencies but things are not clear now cause of COVID... so hopefully in 2022 I will go on tour... In general I want to release more records in the future and eventually become a famous musician! That’s my target since I was very young!

"I had the idea for this song back in 2007. I was at an airport in Germany and I wrote some of the lyrics there. This song is about a friend of mine from L.A. who wanted to become a rock star but his girlfriend couldn’t keep up with his dream and they finally broke up. I dedicate this song to those who want to be rock stars and they are having problems with their girlfriends! Anyways..s o I did the demo for the song back then but I never finished with the whole thing and in 2019 I recorded it at the studio and now is finally published! I really love this song and it brings me back memories from my first years in Hollywood.

"I met Mark in L.A. when he was singing for Uli Jon Roth in 2007 and 2008. We talked several times there but later on I lost the contact with him. So two months ago I was looking for a singer and I thought that it would be great if Mark would sing on my song! So I have a very good common friend with him from Berlin and I asked him to get me in touch with Mark and that was it! So thanks to my friend Mike Dimareli! It’s an honor for me having Mark Boals singing on my music! Mark is a legend you know..