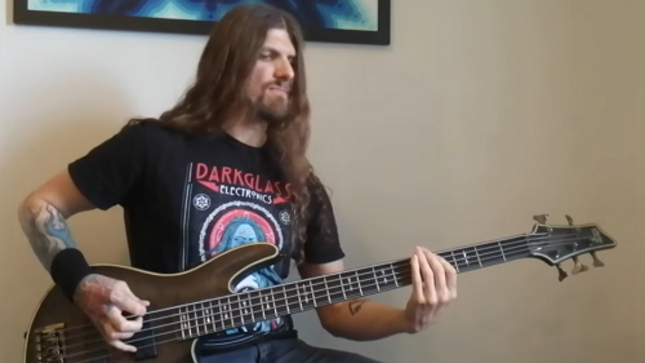 "My playthrough video (of "Thirteen Autumns And A Widow") from last week was met with cries of 'More!'," reveals Cradle Of Filth bassist Daniel Firth. "So I've gone and done another, this time a song that literally no-one asked for, but which really gives me the rage - 'Desire In Violent Overture' (from Cruelty And The Beast - Re-Mistressed)."

"Despite being an absolute rager, this is actually one of the more straightforward songs to play from the album - maybe a good place to start if anyone's considering using my videos as a learning tool. You might prefer to play sixteenth notes during the blast beats, and that's fine, but I personally find eighths provide a thicker tone and underpin the song a bit more solidly."

Cradle Of Filth released Cruelty And The Beast on May 5, 1998 (with Robin Graves on bass). The band issued a Re-Mistressed version of the album on November 1, 2019.

Dani Filth comments: “Released around the same time as we were arrested at the Vatican, Cruelty And The Beast had been a painstaking labour of love, a year of intense writing amid ever growing popularity and distraction. The album’s concept of the Hungarian blood countess Elizabeth Bathory - both historically astute and fictionally correct - was to become a dangerous obsession of mine and one that saw many a first light of dawn working on the lyrics, hellbent on making the story worthy of her legend.”

Dani concludes, “Cruelty And The Beast remains a phenomenally important album in the band’s back catalogue and one that I am exceptionally proud of, as I am exceptionally proud of this Re-Mistressed version, 21 years on from the original release. I hope the listener - sitting there by the flame-lit hearth with his/her walnut pipe on the go - thoroughly enjoys this Cradle classic, so vividly brought back to life for the fickle world today.”