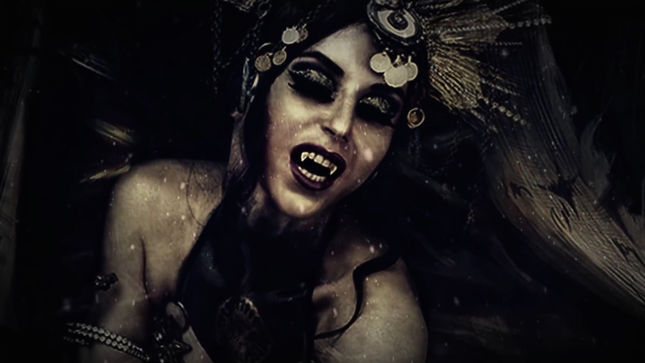 Cacophonous Records has announced that Cradle Of Filth’s Dusk…And Her Embrace – The Original Sin will finally be released as a gatefold double LP on 11th November. This follows the success of the CD and digital releases in July, which landed at #17 in the UK Rock Album Chart.

“Finally the vinyl for Dusk.. And Her Embrace -The Original Sin is due for release on November 11th via Cacophonous Records and I have to say that I am super excited about it finally seeing the light of day on LP format.

“The artwork for the cover is fantastic and different from that of the regular cd format and put together by long-term 'Filth collaborator Drake Mefestta, who envisaged an ornate portraiture of the dusky maiden protagonist.

“Fans should also expect to be assaulted by the feral difference between this and the release that was officially released in 1996 by Music For Nations, with noticeable differences being the addition of 'Nocturnal Supremacy' and the absence of 'Malice Through The Looking Glass', albeit with plenty of differences to bat your ear at.

“There are 666 copies at retail available in bone-coloured vinyl; 200 for mail order in 'blood and bone coloured vinyl, ('bone' with a slash of red splatter) and 100 in a pungent and forestry 'plague green'; all at 140g weight.

Recorded at Birmingham’s Zella Studios in the Spring of 1995, the album saw Cradle Of Filth introduce Gothic elements to their extreme sound for the first time, focusing on decadent vampyric romanticism, death and loss, and forbidden love.

Soon after recording, the band faced a change in line-up, with some members going on to form The Blood Divine. The remaining members of Cradle Of Filth, did not want to release a record that represented the previous line-up and thus opted to re-record. This led to the release of the 1996 Dusk And Her Embrace which was release on Music For Nations. The original recording lay dormant for 21 years until Cacophonous resurrected and released this version in 2016.

Cradle Of Filth signed to Cacophonous in 1994, releasing their debut album The Principle Of Evil Made Flesh on an unsuspecting world, land marking themselves at the forefront of the extreme music movement. With their writing becoming more fluid, more confident, Dusk… And Her Embrace – The Original Sin is the precursor to the band’s sound as it is today, and a must-have for any extreme music fans.

Preorders can be found at this location.

LP1
“Macabre, This Banquet”
“Nocturnal Supremacy”
“Heaven Torn Asunder”
“Dusk And Her Embrace”
“A Gothic Romance”
“The Graveyard By Moonlight”

“Dusk And Her Embrace” lyric video: