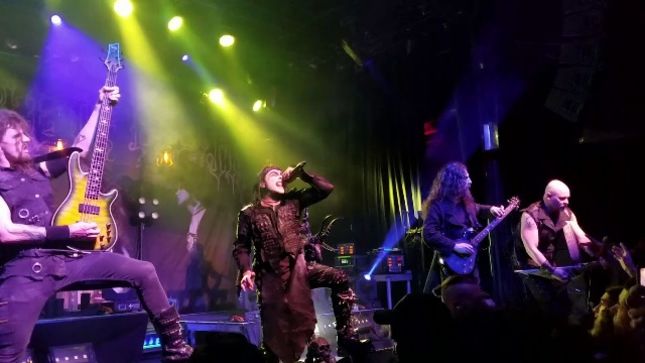 UK-based metal bible Kerrang! recently caught up with Cradle of Filth frontman / founder Dani Filth for a career-spanning interview. An excerpt is available below.

K: You were working towards being a journalist, weren’t you?

Dani: “Well, I wasn’t working hard towards being a journalist. I didn’t get very far. You know when you’re at school and they send you out on work experience? I went to the paper shop, where I already worked as a paper boy. I was going to do an apprenticeship at East Anglian Daily Times, but then, as with most things in my life, I thought, ‘Fuck it. I’m gonna try this, give it a year and if it works, carry on.’ Paul Ryan, who I started the band with, worked in a music shop, so he was alright financially. I thought, ‘I’ll go on the dole.’ He had a PA and a car ‘cause he had money, and we did three demos that first year, and it just kept on rolling. We got approached by labels, album plans came up, and it went from there.”

K: What did you think of people who said you’d sold out?

Dani: “We have massive aspirations, and I dare anyone who starts a band to say they don’t have an aspiration, or a picture of themselves in their mind, to do something massive. You don’t imagine playing in front of two people. You imagine Wacken. And we’ve done that. We knew we’d never be as big as Metallica, but we had aspirations, and we’ve played in stadiums and massive festivals and stuff. We pushed it as far as it could go, which was just a lot further than some people thought it could go.”

K: There was an element of you as ‘The Bad Guy’ in the press…

Cradle Of Filth are currently in the studio working on their new album. Drummer Martin "Marthus" Skaroupka has checked in with some clips and the following message:

"All good here. Everything is going well."