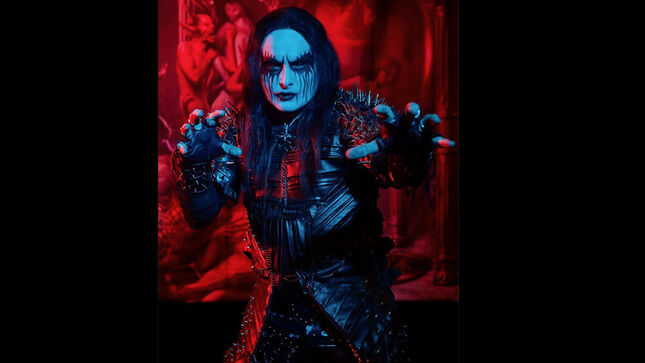 Extreme metal icons, Cradle Of Filth, are back to hit European stages this fall, starting October 1 in Paris. The English cult-followed outfit, led and revolutionized by iconic frontman Dani Filth, will visit 22 cities across 12 different counties, accompanied by Alcest and Naraka.

This massive event reaches its peak on Saturday, October 29 at London venue indigo at The O2 where Cradle Of Filth will celebrate Halloween with a very special and spooky evening under the banner of The Monstrous Sabbat. See below for all current dates and further info on The Monstrous Sabbat.

Dani Filth states: “We are extremely excited to be touring Europe again after the horrid pandemic in support of our latest album and with a brand new themed stage-show to blast it from. The shows promise to be extremely visual and visceral, with two great support bands joining us in the shape of Alcest and Naraka, to bolster the delivery of this nocturnal extravaganza. Come join us then in dark musical ritual this October, on the noisome crawl to All Hallows’ Eve and our annual Monstrous Sabbat, this year blackening the skies above The O2 at indigo at The O2. See you vulgar ghouls out on the open road. Filth!!!!!” 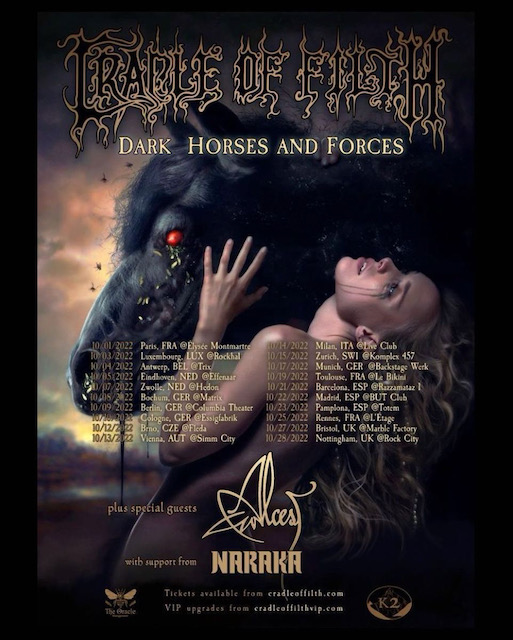 Dark Horses and Forces European Tour with Alcest and Naraka:

* The Monstrous Sabbat VIP Packages will also be available to purchase. Package will include:  show early entry, band meet & greet, photo op, laminate, lanyard + entry to the after party (until  6 AM). The event is followed by an official After Party until late hosted by Voodoo London; a unique rock metal rave/party with a festival style atmosphere with performances from Alice Bizarre, Sophie Storm, Aima Indigo, Sarah Blackmilk and Miss Fortune.