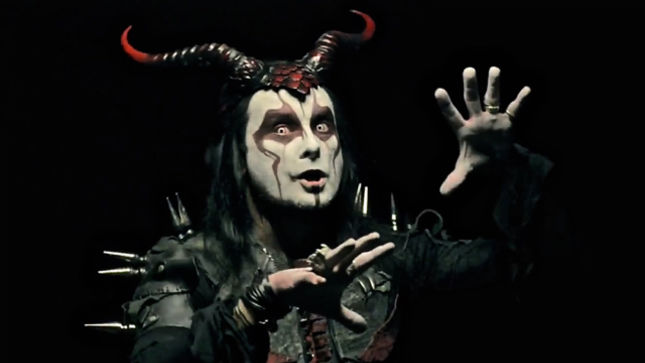 Cradle Of Filth have released a music video for the track "Blackest Magick In Practice" (streaming below). The clip was directed by Sam Scott-Hunter and the song is taken from the groups latest tome of horror and romance, Hammer Of The Witches.

Comments the director: "There’s dark madness in this video. “Blackest Magick In Practice” is a deeply tragic tale of lost love. It’s the grief stricken insanity of trying to bring back that loved one from the dead; desperately trying to hold onto that person who’s gone, even if that leads down a dark and gruesome path. I don’t want to give it all away, but I will say that the hardest part of the production was getting hold of a human ear.

"I wanted to convey the power of the band too, in amongst the romance, madness and magick. Behind the imagery of the lyrics is a great and powerful metal band of amazing musicians, and I hope people can feel the intensity of the band when they watch this. It is intense viewing. There should be a bit of madness in the video, because there’s madness in this song."

Cradle Of Filth will return to North America in 2016 with the Inquisitional Torture tour. Joining them will be Ne Obliviscaris and Butcher Babies as support. Tickets are now available at Ticketmaster.

Cradle Of Filth's latest album, Hammer Of The Witches, was brought to fruition in Britain's Witch County, in darkest rural Suffolk at the reputedly haunted Grindstone Studios. The album's title is named after the Malleus Maleficarum, a medieval document of guidelines regarding the persecution and torture of witches - but Cradle Of Filth’s title version is more retributory: It's the Hammer Of The Witches; the hammer is in the witches' hands and it's payback time.

Unquestionably one of the greatest and most influential British metal bands of all time, Cradle Of Filth have cast a commanding and macabre shadow across the metal scene for nearly a quarter of a century. Armed with their trademark, cross-pollinated assault that taps into myriad strands of sonic extremity and morbid opulence they have steadily conquered the entire world, unleashing a malevolent slew of classic albums along the way. From the raw and rambunctious savagery of their 1994 debut The Principle Of Evil Made Flesh to the wickedly monstrous, technicolor bombast of 2012's The Manticore & Other Horrors, the Cradle ethos and aesthetic has had a huge impact on the evolution of metal, the band's insatiable appetite for performing live and frontman Dani Filth's unerring charisma and sense of occasion ensuring that they have established a powerful and enduring connection with Hell-bound acolytes everywhere.