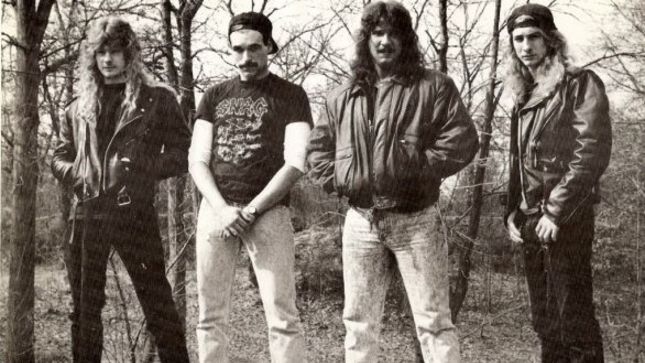 It’s been 30 years since four hard rock kids from Bridgeport, CT formed the influential metal outfit, Crossover. And with some new technology and a little help from Connecticut music pros, the band has returned to the spotlight with their original EP, Painkiller, completely remixed and remastered. While much has changed for the members and the entire rock scene, their music has truly stood the test of time. Listen to the title track below:

The re-released and redone EP includes three live bonus tracks, and their 4 original songs, “Painkiller”, “Identity”, “Too Many Fears” and “True Believer”. “It's gritty, raw, and as old school as it gets,” says Jay “Ice” Piccirillo. “If you like Metallica Kill Em' All meets DRI then this is a must listen! Enjoy and thank you all for the great memories!”

Crossover formed in Bridgeport, CT during the late-‘80s as part of the hardcore and metal scene that was beginning to flourish around New York City. Jay had an idea to put together a metal/hardcore/thrash/punk style band which, at the time, was labeled “crossover” music. Composed of Scott Smith (rhythm guitar/vocals), Bill Smith (drums), Scott Camara (guitar) and Jay “Ice” Piccirillo (bass), the band played everywhere from keg parties to clubs, and quickly gained a loyal following.

During the fall of 2002, the band reunited for a live benefit show that would feature Crossover, Payback, Sonick Plague, Dresden, Lost Generation, Forced Reality, and 76 percent Uncertain. The band’s lineup that night consisted of Jay, Bill Smith, GB Hammond from Lost Generation, Charlie Taylor from Payback, and Andy Reitano from Blastmat.

While the band’s lifespan was relatively short, their influence can still be felt today. Hatebreed singer, Jamey Jasta, bought Jay’s Mesa Boogie amp when they were in their beginning stages and told him he had a Crossover sticker on his bedroom door when he was 14 years old. Piccirillo recalls, “It was pretty damn cool hearing that.”

It is now 30 years later since the original demo was released and over the years technology has come a long way. Crossover now has the sound and mix they envisioned three decades ago, and are excited to share it with old and new fans alike.