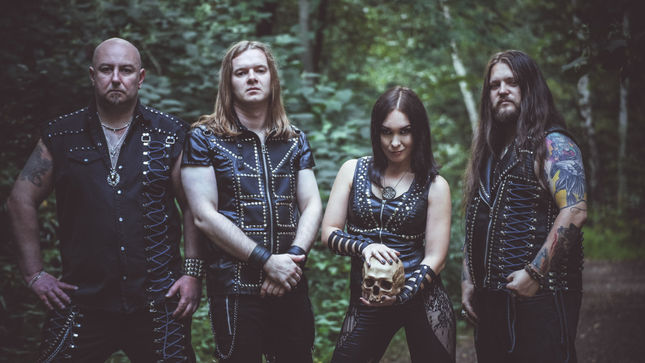 On December 9th, Polish metallers Crystal Viper will release a video for the first single off their new album, entitled "The Witch Is Back". The video was produced by the Grupa 13 production house, which most recently also did the Kreator, Behemoth and Amon Amarth videos. "The Witch Is Back" single will be available as an online stream on Spotify, Apple Music and other streaming services, and the digital download will be available on iTunes and Amazon. Fans who pre-order the digital version of the forthcoming new album, will be able to immediately download "The Witch Is Back" single for free.

Crystal Viper are returning after a four year absence, with a brand new concept album entitled Queen Of The Witches, which will be released on February 17th via AFM Records. The album was produced by Bart Gabriel (Cirith Ungol, Mythra, Sacred Steel), and engineered and mixed by Mariusz Pietka (Jack Starr's Burning Starr, Lonewolf, Mortician). The album's cover artwork was created by the legendary German artist, Andreas Marschall (Running Wild, Blind Guardian, Obituary).

Queen Of The Witches" also features three special guests: Manowar co-founder and guitar hero Ross The Boss, and Jeff Dunn (aka Mantas) of Venom / Venom Inc. will appear with guitar solos on two of the songs. One of the songs will feature a duet from Marta Gabriel and Steve Bettney, vocalist of the NWOBHM cult heroes Saracen.