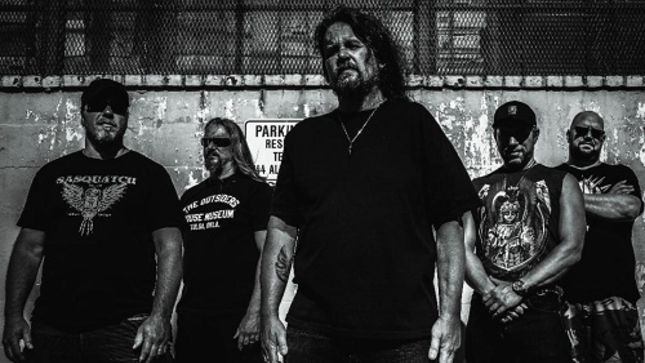 As a final decision in the highly divisive 2020 election approaches, New York metal quintet Damn Your Eyes is presenting a new lyric video for “Lock And Load,” a nonpartisan observation from opposing sides.

“Damn Your Eyes is not a political band by any means,” the band says. “‘Lock And Load’ is a story of two sides, from their perspective, that focus on the differences they have and not the common ground, which often times leads to conflict. We took all this and put it to a slamming, thrashy, musical soundtrack. Politicians have turned cultural differences into a political issue, a very dangerous road that makes people choose sides. We love all cultures for their unique perspectives and hope for a peaceful solution to the conflicts the extremists on both sides have taken to the streets.”

“This is an old school, Bay Area type thrasher,” says guitarist Artie Alexander. “We dove into our roots and incorporated the type of guitar work, breakdowns and gang vocals that made us metalheads. ‘Lock And Load’ showcases the growth of this band and the path we are headed on. We make no apologies for honoring the music and thought-provoking lyrics that made us.”

The “Lock And Load” single is available here.

Formed in 2015 by Artie Alexander and former drummer James Baldassano, Damn Your Eyes immediately hit the ground running. As respected musicians in their local scene with extensive recording experience, the band quickly recorded an EP, released it to local acclaim, and rapidly returned to the studio to record their upcoming international full-length debut, Kill The Outside in 2019. But as the band was building a following, it seemed to its members that there were some missing pieces to the Damn Your Eyes puzzle. Enter former guitarist Gabriel “Gabby” Abularach, drummer Darren Markoff, 24-year veteran of Long Island metal band Korotory, to complete the puzzle.

Damn Your Eyes entered the studio with this bone-crushing new lineup in July to record several new tracks. The first, “Heavy Is The Head,” debuted in late September. Keep an eye out for more music from Damn Your Eyes in the coming months!