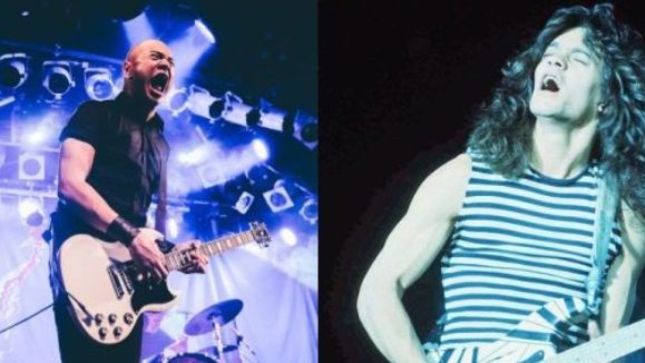 Toronto rocker Danko Jones has written an article for Talkhouse.com in praise of Eddie Van Halen, with Danko offering his thoughts on Eddie's musical genius. Following is an excerpt:

"When Eddie Van Halen passed away on October 6, 2020, it was like a sucker punch to the gut. In no time, the tributes and testimonies filled the internet. This was more than a distinguished music figure passing, this was someone who was beloved as much as he was revered. This was someone who had accompanied a legion of fans through their teen years into adulthood. For me, he was the reason why I picked up the guitar in the first place and remains my favorite guitar player of all time.

Not to diminish any of these heartfelt Eddie Van Halen testimonials but what more is there left to say that hasn’t already been stated while he was alive? Eddie Van Halen has long been considered an unparalleled virtuoso who changed how people heard the guitar and inspired a generation of players. He was beloved by millions and the stadium throngs who clamored to hear him play confirmed and conveyed this adoration. If there’s any consolation, recognition and respect were lavishly paid to him to satisfy 10 lifetimes.

And yet, digging deeper into this mysterious pop culture icon, more evidence points to my assertion of him as frustrated artist. On the Van Halen album 1984, the title track is a one minute and nine second synth piece, à la Vangelis or Jean Michel Jarre, that fades out to usher in their biggest pop hit, 'Jump'. At the time, it felt like a bold declaration from Eddie that he was expanding the band’s sound with keyboards in defiance of hard rock’s close-mindedness. In recent years, everything that’s been uncovered about the track hints that it was only a minute and nine seconds of a larger 30-minute piece that has never been released. Almost as if Eddie knew a minute was all his stock rock crowd could handle with something a little off-centre.

To most rock fans, Eddie Van Halen’s musical career reached its zenith and beyond. To the wider pop culture audience, Van Halen songs like 'Jump', 'Unchained', and 'Right Now' are enough to ensconce him in the prestigious halls of pop culture forever, alongside Cole Porter, Duke Ellington, and Ennio Morricone. But I can’t help having an itchy hunch that underneath the hard rock guitar tapping and whammy bar antics lay a phantom of the opera type monster, capable of scaling musical heights that nobody would or could ever dare scale. He was simply that brilliant.