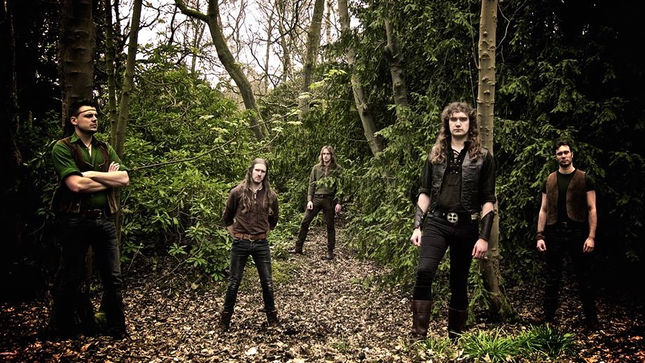 UK metallers Dark Forest will release their new album, Beyond The Veil, on August 26th via Cruz Del Sur Music. The album track, “The Undying Flame”, is now streaming below.

The history of UK heavy metal is a long and rich one, producing some of the world's greatest bands. With Beyond The Veil, Dark Forest carries on a proud tradition with an album of fiery metal and unforgettable songwriting, laced with medieval and folk elements.

Beyond The Veil features original artwork by Duncan Storr, the English artist known for providing amazing paintings for Skyclad and Rage. HellFire Studio mastermind Ajeet Gill is currently mixed and mastered the record. The album is almost 70 minutes long and features 12 tracks of astonishing heavy metal.

Beyond The Veil represents Dark Forest's peak of creativity, the zenith of a process begun in 2009 with the release of their self-titled debut album. If their last album The Awakening was a sort of "rite of passage", then Beyond The Veil is the full realization of potential. The tie between Dark Forest and the lore of their land is authentic and is expressed with mature and poetic lyrical content. A big credit in this process must be given to vocalist Josh Winard (ex-Wytch Hazel) whose performance is dramatic and powerful.

The Beyond The Veil compact disc edition comes with 16-page booklet, including more original artwork from Duncan Storr. The vinyl LP version will be released in a luxurious gatefold edition and comes with an A2 poster.