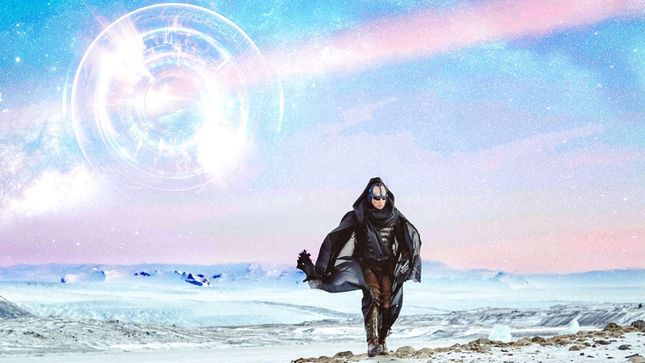 Following the release of debut album Origin Of Species in early 2019, DarWin is set to release the follow up album, DarWin 2: A Frozen War, on November 6th.

“Eternal Life” is the new single from DarWin’s second album DarWin2: A Frozen War. Guitarist Guthrie Govan joins DarWin with amazing solo work on this epic song; the lyric video can be seen below.

The second album builds on the themes of Origin Of Species - first single “Nightmare Of My Dreams” features a stunning video (watch below) centred around the theme of the recent wildfires and filmed in areas of Australia directly affected. The other tracks build on DarWin’s sound - drawing the best elements of progressive rock with a depth of vocal sound scapes and  songwriting. There is a generous amount of guitar shred and heavy grooves on display for the rock faithful who demand athletic performances.

"Nightmare Of My Dreams" video:

The album is also be available in spectacular Double Coloured Eco-Vinyl Gatefold LP with 30cm x 20cm poster. LP1 will be the standard album tracklisting, as above. LP2 features new interpretations of various songs from the first two albums, highlighting  the orchestral or unplugged performances of the earlier tracks.  They were all mixed and rearranged by mastermind Simon Phillips, and show a more delicate and emotional side to the DarWin recordings.

The full tracklisting for LP2 is as follows

DarWin says. “We completed this album under extraordinary circumstances. The writing for the album continued as we wrapped Origin of Species in 2018, and our worlds were turned upside down by wildfires and viral pandemics. We’re grateful to the amazing group of musicians, artists and professionals who participated in this project. Almost no aspect of the creative process was “typical,” with team members spread out around the world, and often under lock down. We had our instruments, our technologies, and a passion for musical creativity. We hope that the emotion and resilience of this time period will come through these recordings.”

DarWin 2: A Frozen War was produced by DarWin and Simon Phillips and recorded primarily in Iceland and the US.

DarWin’s debut Origin Of Species was the first instalment in an epic saga that addresses the challenges of mankind in our coming era. It depicts the role of a changing planet, and the potential, as well as limitations, of technology to help solve mankind’s greatest challenges. A complex project that’s eschews the hollow immediacy of much contemporary art. A story that demands attention and imagination. With music sweeping in scope, at times evoking hard rock virtuoso shredding, alongside grand orchestral compositions, warm harmonies and soaring choruses. A project that is even more relevant in the strange times we live in.