DAVE GROHL - "After NIRVANA Ended, I Didn't Wanna Play Music; I Sure As Fuck Didn't Wanna Be Someone's Drummer" 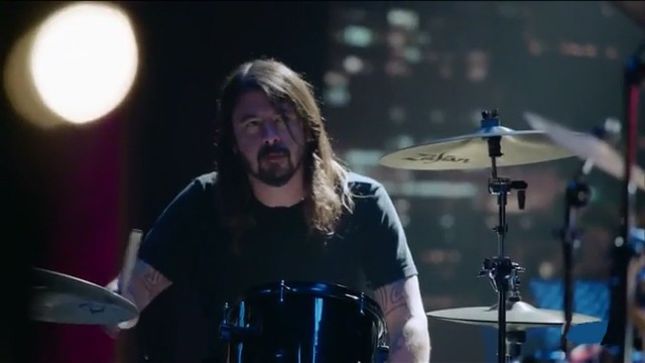 Foo Fighters founder / frontman Dave Grohl is featured in a new in-depth career spanning story published by The Guardian, reaching all the way back to his pre-Nirvana days. Following is an excerpt:

After (Nirvana frontman) Cobain’s suicide, Grohl received invites to join the likes of Pearl Jam but refused offers. In October he made the Foos’ self-titled debut instead, recording all the instruments himself as an exercise in grief.

“I never imagined I would be the singer of a band,” he says. “After Nirvana ended, I didn’t wanna play music. I sure as fuck didn’t wanna go be someone’s drummer. I knew that it would remind me of Nirvana. I’m very proud. Nirvana changed my life for ever but there were times when I wanted to escape it. Just picking up an instrument or turning on a radio made me so sad. Then I realised that doing the thing I’d always done – go to a basement, record by myself – might restart my heart.”

This song ("Alone + Easy Target") was written in Grohl’s basement in 1992 after the Nevermind tour ended. On a trip to New York to play Saturday Night Live, Grohl went to Cobain’s hotel room to share it with him.

“He was having a bubble bath,” recalls Grohl. He pressed play and left Cobain to soak in it. “I went back in and he kissed me! That might have been the only time I ever felt validated by the band.” Some resented Grohl’s decision to keep playing. “I didn’t imagine I was gonna pick up where Nirvana left off. I didn’t imagine myself to be Freddie Mercury,” he says. “I made 100 cassettes and handed them to friends. I called it Foo Fighters because I didn’t want people to think I was trying to be Tom Petty.”