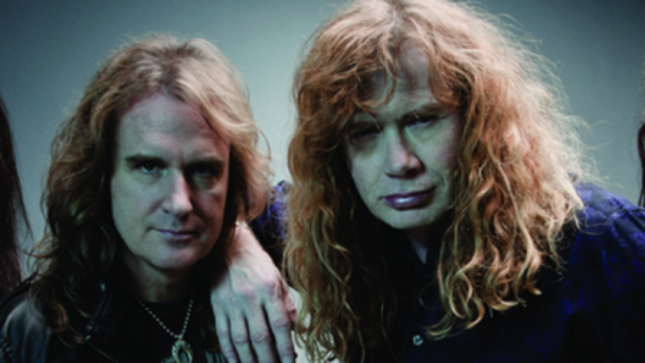 Megadeth frontman/founder Dave Mustaine recently spoke with Eddie Trunk about the band's latest album, Dystopia, his relationship with bassist David Ellefson and the other members of the band, his own performances, and much more. Check out the podcast below.

Cranked Up Live recently caught up with Ellefson to discuss Dystopia and his relationship with frontman Dave Mustaine. Check out the interview below.

Megadeth notched the Billboard 200 chart’s highest debut last week, as the band’s new album, Dystopia, bows at #3 with 49,000 units (48,000 in pure album sales). It’s the highest charting album for the act since 1992’s Countdown To Extinction debuted and peaked at #2 on the chart dated August 1st of that year. The new album also logs the group’s best sales week since 2007, when United Abominations launched with 54,000 sold at #8.