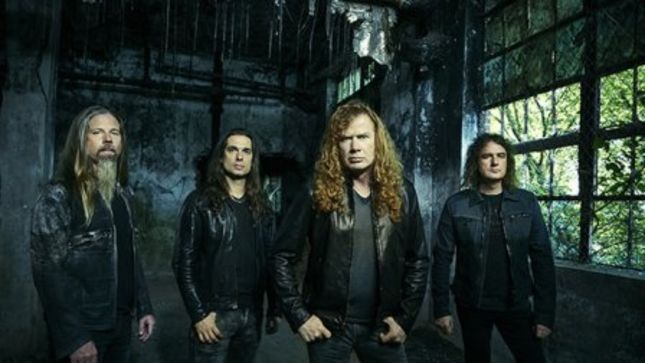 In a recent appearance on Fozzy frontman Chris Jericho's official podcast, Talk is Jericho, Megadeth frontm Dave Mustaine tacked an variety of subjects including the possibility of more Big Four shows with Metallica, Slayer and Anthrax. Check out the interview using the player below.

Mustaine: "If it happens again, that would be great. If it doesn't, the people who got to see it got to see something really remarkable. I think that Megadeth is at a place right now where we're successful to a degree where we would be happy continuing to do what we do on our own. So, if we're going to do another Big Four thing, I would want it to be something where we walk away as content as Metallica does from something like that. It's not Metallica and three other dudes."

On February 26th, Megadeth performed at the Pearl Concert Theater in Las Vegas, NV. During their set the band played "Dystopia", the title track from Megadeth's new album, for the first time ever. Fan-filmed video can be viewed below.

The North American leg of Megadeth’s Dystopia World Tour will take them across the US, visiting 12 states and throughout Canada.

Megadeth’s North American tour kicked off on February 20th in Dallas at the South Side Ballroom. Check out fan-filmed video below: