DAVE MUSTAINE - "People Have Made A Big Deal About My Faith, But The Bass Player Of MEGADETH Is A Pastor; Why Doesn't Anybody Bring That Up?" 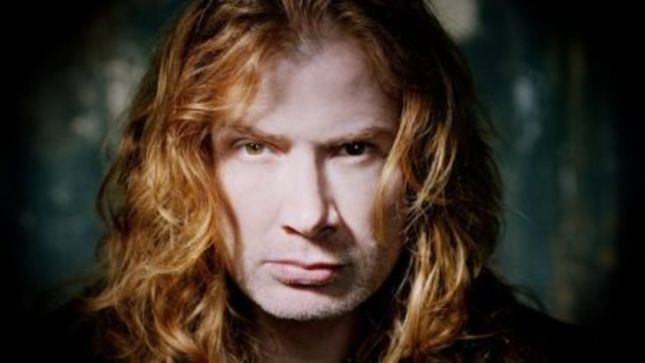 In a new interview with Vice's Noisey, Megadeth frontman/founder Dave Mustaine discussed the band's new album, Dystopia. An excerpt from the in-depth interview, which covers everything from music politics to religion, follows:

Noisey: I know you’re coming from that more conservative viewpoint, which is more common in heavy metal than people may assume; it’s a genre that places an emphasis on tradition and individual freedoms—views that are themselves often interpreted as conservative.

Mustaine: "I'm not really that conservative, by the way. I'm loyal to what my viewpoints are. My mom was first-generation American, she was born in Germany, so I have a lot of European influence in my upbringing, and I don't really think that I'm conservative as much as some of the other people, but I do know I'm loyal to the bands and the people that I like. People have made a big deal about my faith, but for god's sake, the bass player of Megadeth is a pastor, why doesn't anybody bring that up?"

Noisey: Because you’re the lightning rod.

Mustaine: "Yeah! It has nothing to do with Christianity, it has to do with me and what I believe in. I could be a Presbyterian, and say that when you die you get thrown up onto the roof of your house or something like that. It’s because of what I believe. No one goes up against David Ellefson and says, 'So you believe in God, huh?' Dave is kind one of those dudes that he's not the lightning rod."

Megadeth’s anxiously-awaited fifteenth studio album, Dystopia, is due out on January 22nd via Univeral Music Enterprises. The album’s title track is now streaming below: