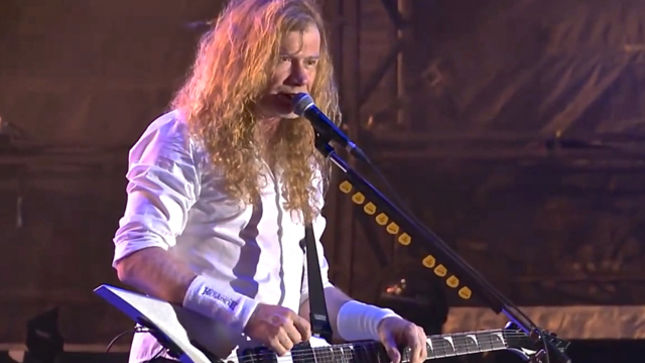 Ahead of their show at the 3Arena in Dublin, Ireland with Lamb Of God and Children Of Bodom in support on November 9th, Megadeth leader Dave Mustaine spoke with The Irish Sun about a number of topics, including the band’s upcoming new album, Dystopia, an album that pleases himself, first and foremost.

Dave says: “I think sometimes when you are playing with somebody, you can maybe take things for granted, and maybe sometimes you get into a place where you’re not really challenging yourself. I’m not saying this about any particular lineup, but this is something that’s been going on for a very long time where I wasn’t thinking along the lines of making a record for myself anymore.

“I’ve found over the years that records the fans gravitate towards most are the ones I’ve written for myself — not trying to guess what they like, but making myself happy. And we have similar taste.”

Read more at The Irish Sun.

Megadeth will issue a 12” single as part of Record Store Day's Black Friday on November 27th. The single will include two new tracks from the band’s upcoming Dystopia album, “The Threat Is Real” and “Foreign Policy“.

Now in its eighth year, Record Store Day is an annual day-long celebration of record store culture taking place on the third Saturday in April, with an annual Black Friday event occurring the day after Thanksgiving. This year, RSD has named Dave Grohl as Record Store Day Ambassador 2015.