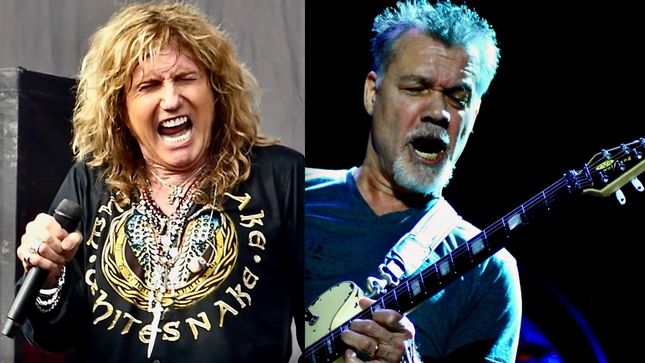 David Coverdale has remembered Eddie Van Halen as “an absolute monster musician”, and suggested that a reunion of Van Halen with former frontman Sammy Hagar may have been on the cards before the guitarist’s passing. Coverdale made the comments while speaking to eonmusic about the release of Whitesnake’s forthcoming Love Songs compilation, which is due via Rhino on November 6.

Speaking about how Eddie first came to his attention, David revealed that it was when considering John Sykes for Whitesnake in 1983 that he became aware of Van Halen’s talents. “I’d only heard of Van Halen because once I started to work with the unique talent of John Sykes, I like to do my homework on people, and I thought; “he’s influenced by this American guy Edward Van Halen”, said Coverdale; “That’s when I first heard those records, and heard this fucking phenomenal guitar playing. The last time I’d heard guitar playing like that was Jimi Hendrix, and John McLaughlin, and Jeff Beck; this unique scenario.”

David went on to recall the last time he saw Eddie, around, presumably 1993 or 1994, when he was working with Led Zeppelin’s Jimmy Page as Coverdale Page. Said Coverdale; “The last time I saw him, I was sitting in my hotel suite in London with Jimmy. It was like 10 o’clock in the morning, and we were just having a very elegant gentleman’s cup of tea; tea pot and everything! [laughing] And the door to my suite goes, and Edward just pushes past, and I go; “Edward, how are you doing?” And he goes; “alright, great to see you… Ah! Jimmy Page! Jimmy Page!”, and, well first off, he goes to my minibar immediately at 10 o’clock in the morning and takes a fucking Heineken out, and he’s at Jimmy’s feet, and he picks up my acoustic, and he’s like; “how did you play this fucking thing?!” [laughing]. You know, it’s amazing; I had Eddie Van Halen and Jimmy Page sitting there, and Eddie had a Heineken, and Jimmy and I had a cup of tea!”

Check out the full story here, and read the entire interview with David Coverdale, only on eonmusic, from Friday, October 30.