DAVID CROSBY - "I Don't Have A Relationship With NEIL YOUNG Or GRAHAM NASH At All... I Still Really Love STEPHEN STILLS" 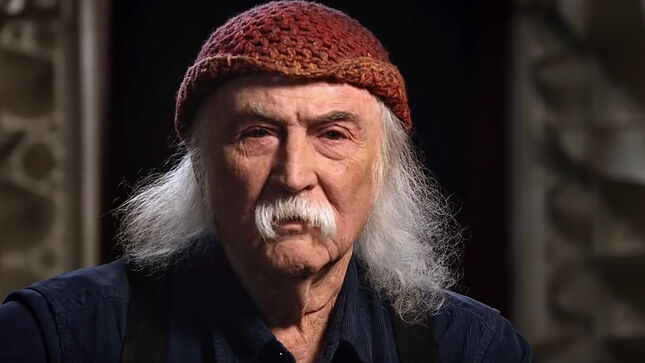 Singer/guitarist/songwriter David Crosby (The Byrds, Crosby, Stills & Nash, Crosby, Stills, Nash & Young) is featured in a new interview with Greg Prato for Songfacts. He discusses the definitive Byrds and CSN songs, the day he met Joni Mitchell, and the song he wrote after a conversation with The Beatles legend, George Harrison. An excerpt follows...

Songfacts: It's hard to believe that both CSN's debut and CSNY's Déjà Vu celebrated 50-year anniversaries a few years back. How do you think those albums hold up today?2

David Crosby: "Match them. Show me a record put out in the last year that's anywhere near as good."

Songfacts: How is your relationship currently with the other members of CSNY?

Crosby: "Oh boy, do I. One is my son James, who is my producer for one of my two bands, Sky Trails, which is really just me and James and anybody we decide we want to work with. We write well together, and he's a much better musician than I am. He's my son and I'm really proud of him, and we do really good work together. That's one.

"Then there's this guy Michael League, who is the band leader, composer, and bass player for Snarky Puppy. If you haven't heard them, go listen to them, you won't be able to hold still. They're just fantastic. Michael and I have a chemistry with these two girls, Becca Stevens and Michelle Willis, and the four of us have a group called Lighthouse.

"I think you'll see one more Lighthouse record and one more Sky Trails record before I go. I'm working on them. I do have another Lighthouse record finished in the can, a studio record ready to come out. I think it's going to be called Hello Moon. And then there's the live record of the Lighthouse band coming out."

Read the complete interview at Songfacts.