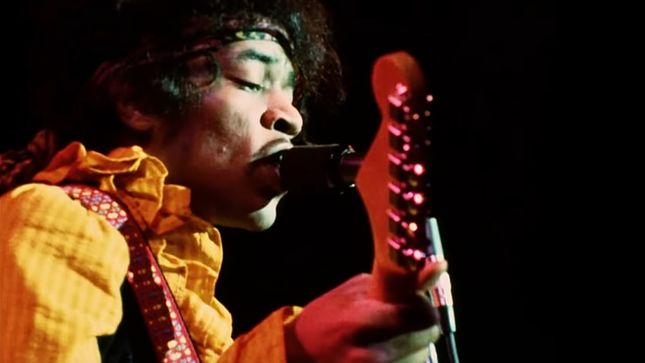 In celebration of 50 years of Jimi Hendrix, ballbustin' guitar rocker David LaDuke relaunches his one-of-a-kind salute to the legendary Seattle-born guitarist, who passed away on September 18, 1970.

"A Guitarist Nightmare" was recorded in the 1990s for an all-guitar tribute album to be called Electric Impulses Gone Mad. Inspiration for the album came from Hendrix's Are You Experienced and other 1960s groups, including the Yardbirds and Status Quo. Though never released, David made tracks available to supportive fans.

This Thursday evening, September 17, at 7 PM, EST, 4 PM, PT, "A Guitarist Nightmare" will go live on YouTube. 6:50 minutes of pure guitar mayhem. For now, check out a preview clip below.

"A Guitarist Nightmare" will remain live on YouTube before going back to private on October 31.

David's interpretation of "All Along The Watchtower" is below:

David started playing guitar in 1963, after hearing his next-door neighbor and founding N.R.B.Q. guitarist Steve Ferguson jam out Lonnie Mack covers in his backyard. David formed the popular regional Rock and Soul group, Shadows of Tyme, in 1968. He and his roots/metal/rock and roll group Sinbad have released several LPs, EPs, and CDs. His album S.I.N.B.A.D. was on the California based indie label Azra International (Overkill, Liege Lord, Intruder, Jag Panzer Axemaster). His solo releases Have Rock Will Travel, Ball Bustin' Guitar Rock!, plus two live EPs: Absolutely Raw (Nothing more. Nothing less.) and Absolute Rock (In the buff.), and the CDs: Rock Hard Rocker and Rock with Balls. His unique blend of '70s' guitar rock with an Elvis Presley-influenced groove has gained him an excellent reputation in magazines and radio stations worldwide.

Also, check out David's demo video & track "Gonna Get Ya" on Bongo Boy's upcoming Howl-O-Grim Vol 2 EP in late October. "Gonna Get Ya" will be available on the forthcoming David LaDuke CD Put Up Your Dukes in 2021. That album will include demos, remastered and remixed, and unreleased songs. The Kryp II Knight compilation is available on most digital platforms. Fans can order it online here.