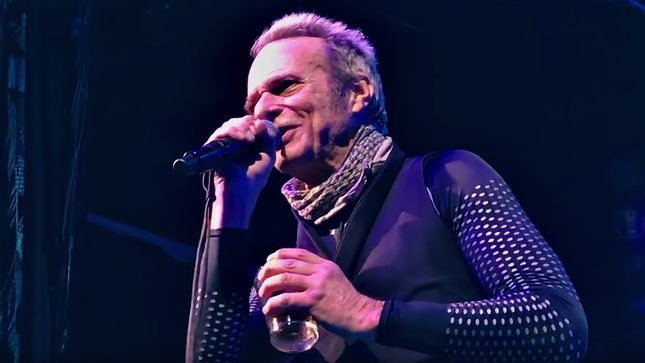 Van Halen vocalist David Lee Roth recently released a new solo song, "Somewhere Over The Rainbow Bar And Grill". In a new interview with Variety, Roth explained the songs is a tribute of sorts to bandmate Eddie Van Halen, who passed away on October 6th following a long battle with cancer.

The song was written before Eddie Van Halen's death, but writer Richard Bienstock suggests - and Roth agrees - it functions as something of a tribute to their shared history.

Roth: "I don’t usually write autobiographically, but this was a specific effort to replicate a time and a place. I actually walked past the door of a local drinking establishment and smelled the sawdust, and like Proust with a lemon cookie, it triggered volumes of memory.

There are two kinds of burials in show business. One’s very quiet, behind the scenes, nobody attends. And then there’s a 'show biz' approach, where you have a solemn ceremony and it’s followed by a reception where everybody gets up and tells stories. They can be off-color, they can be tear-jerkers, they can be of any nature. When my dad passed, the reception was at a Mexican restaurant around the corner. Everybody was eating and drinking and then the speeches become more colorful and much more energetic. Sometimes that’s the most heartfelt, heartbreaking, best material ever. And so I thought, if that occurred for Ed — which it did not — and everybody was going to get up and tell a story, when it got to my turn I would start with, ‘The smell of fresh sawdust on the floor…’ And go from there. That’s the beginning of the story, at least for me. Because that was everywhere we played — the smell of fresh sawdust on the floor."

Read the complete interview here. Listen to / download "Somewhere Over The Rainbow Bar And Grill" now at this location.

The Rainbow Bar and Grill can be found at 9015 Sunset Blvd. in West Hollywood, California. Opening in 1972, The Rainbow has since become a world famous hangout for musicians. Further details can be found here.