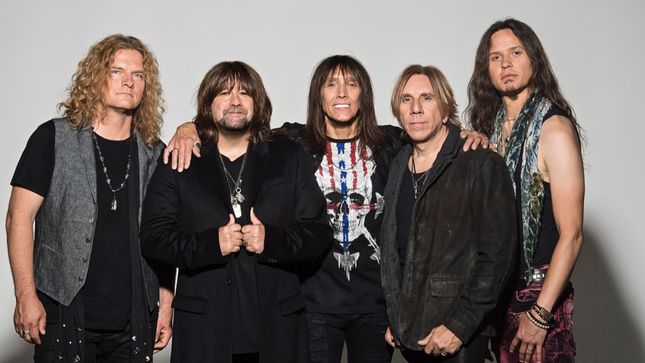 Canada's The Metal Voice recently spoke with Tesla bassist Brain Wheat about his new book, Son Of A Milkman, which was released December 15, 2020 via Post Hill Press. An excerpt from their chat, which can be heard in its entirety below, reads as follows:

Which part of your career are you most proud of?

"I said in the book that I am more proud of the second half of Tesla's career than the first half, and I'm not talking about the records, I'm talking about the band persevering. The second half our career has been us all on our own, doing it ourselves, and that is what I am really proud of. The first half we had the big giant machine. We had Q Prime (Management), Geffen Records, we had MTV, we had all these things that help make bands big. But in the second half of our career after we got back together, it's all up to us to carve out a niche for ourselves and we did and I am really proud of that."

What was it like to be on tour and open for David Lee Roth? Is he the same person we see on TV?

"He is always in David mode, to be quite honest with you I only spoke to him one time the whole tour. We walked in a room and it was all David mode, that whole it's Dave TV thing, that was my take on him. Like I said I only got to spoke to him one time and he wanted to manage the band (Tesla). Talk about coming out of left field he said guys I really want to manage you. We are like whoa ok well we got this management Q Prime, you heard of them and that was it."

On a side note is Tesla working on a new studio album or doing any live streams since there are no live shows?

"I don't think so, I don't know, Tesla is the kind of band that feeds off the crowd, it's a live experience. When you say live it's live. It's hard for us to do that, that's probably why we were not that good at doing videos. We got approached earlier for that and said no. If we don't end up playing this year maybe we will do just one purely for the fans. Maybe more of a round table interactive thing. In regards to new material, we have to be in a room together. My buddies in Def Leppard are making a record and the members are in different places all over the world and they send files to a central place in Ireland. Tesla can't make a record like that, that's not how we do things. And God bless them for being able to do it but we just can't. We are very much in the old school kind of way. I think the next record will go a different way, a bit more organic instead of so produced (like the last one) and maybe we will try to do this one on our own."

Brian Wheat lifts the lid on living the rock ’n’ roll life while struggling with anxiety, depression, and other issues seldom discussed by musicians in his new book, Son Of A Milkman: My Crazy Life With Tesla, available via Post Hill Press (and co-penned by Chris Epting). Order the book here.