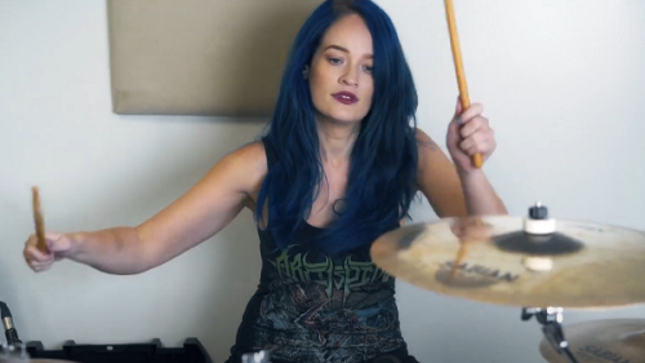 Vancouver's Dead Asylum has issued the following update, in regard to the departure of drummer Samantha Landa:

Samantha has come to the decision to part ways with Dead Asylum.

Sam founded the group with Mike (Lister - vocalist / guitarist) over ten years ago and through several North American / Canadian tours, two albums, hundreds of shows, and a couple of broken down RVs, we know she will always be a part of the Asylum, but now must focus 100% on her other project.

We will always cherish the time that Sam spent in Dead Asylum, and we wish her nothing but the best in her new journey.

This by no means is the end of Dead Asylum, we are fully committed to putting out new music this year and when possible play f*ckin live!

Join us in wishing the best for Sam."

Samantha issued her own statement, which reads:

"I've decided to leave Dead Asylum to focus 100% on Conquer Divide. With a new label and a busy year coming up, it's not fair to my other bandmates or the teams behind them for me to not be able to give them my all. With that:

Dead Asylum: This one cuts pretty deep because of the history. Mike Lister and I founded the band back in 2011, over 10 years ago, and we combined our diverse interests with Mike's thrash and my melodic death metal to try and do something a bit different. We've been through a lot, including North American tours, broken down RVs (multiple times), sketchy San Francisco massages, a cheese grated leg, two albums and a demo, shows with hundreds of people and shows with nobody there. This band has taught me a ton and when I moved across the country in 2017, I knew it would be difficult to stick with the band, but I tried my best. Then I got involved in the other two bands, and it was becoming harder and harder to find time to write and make commitments to DA. I put my heart and soul into this band for years and because I love it I need to say goodbye. I know Mike will carry on the band and keep kicking ass, and I'm grateful to him for always being a loyal bandmate and friend. Huge huge thanks to all the Dead Asylum fans who have been extremely supportive - love you all!

If you've made it this far, thanks for reading, and thanks for sticking with me through all of this! Lots of fun stuff to come."

Check out Dead Asylum's lyric video for "Death Always Wins", as well as their official video for "Forgotten Sacrifice":