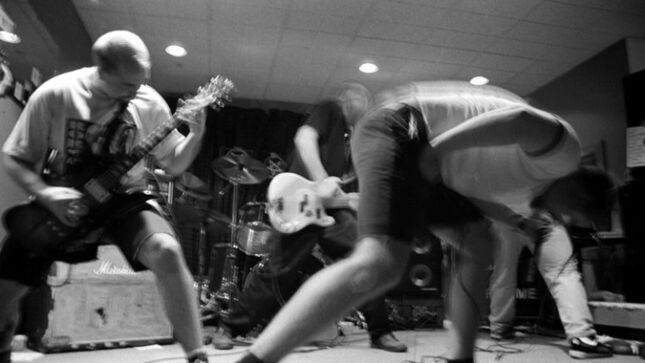 A limited fan-aimed cassette release, Driving You Straight To Hell Bootleg 1995/1996 includes two live sets from Deadguy in their peak/most infamous form while signed to Victory Records. Side A features a set recorded live in New York City in 1995, as performed by the seminal Fixation On A Coworker lineup not long before its dissipation and the band’s reformation. Following the band’s separation, as several members moved to Seattle to form Kiss It Goodbye, the Side B set was recorded in New York City in 1996 with the Screamin’ With The Deadguy Quintet lineup.

Side A’s set is previously unreleased, and although the B Side set was initially released by Hawthorne Street Records, both original recordings on Driving You Straight To Hell Bootleg 1995/1996 have been put through a full audio restoration and mastering process by Today Is The Day/SuperNova Records’ Steve Austin and the arsenal at his Austin Enterprise studio. Noisy, abrasive, and raw, the chaotic live attack of Deadguy is here delivered to fans like a time capsule from the band’s short-lived lifespan which has left an undeniably diehard cult following ever since.

The Driving You Straight To Hell Bootleg 1995/1996 tape is provided through a liaison of labels and collectives, including SuperNova Records, Popgun, Suspects Audio Documents, Hawthorne Street Records, and Fourth Media. The SuperNova edition is produced in a limited run of 100 Baby Blue cassettes, signed by Steve Austin.

Order at the SuperNova Records webshop.

Watch for SuperNova to release a digital variation of the record to see release in the months ahead.