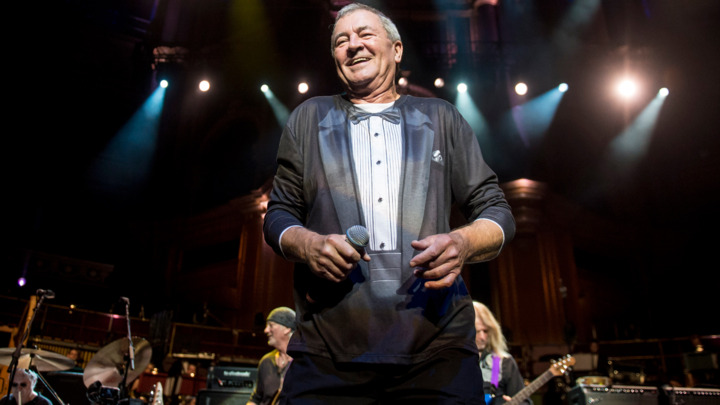 Deep Purple frontman Ian Gillan recently spoke with Kory Grow at Rolling Stone. An excerpt from the interview is available below:

Rolling Stone: There was a lot of controversy this year with KISS' current members not wanting to play with their original members at this year's Rock and Roll Hall of Fame induction. Would you be willing to play with the group's founding guitarist, Ritchie Blackmore, who had a bitter split with the band in 1993, at the ceremony if you were inducted?

Gillan: "Well, we are the living, breathing Deep Purple. This is the longest that any lineup has ever been together in this band. And it would be unconscionable to think about bringing Ritchie in. I don't have an issue with Ritchie, nor does anyone. I've been in touch with Ritchie recently and everything's cool, so there's no bitter, personal problem. We're too old for that and everything's in the past, but no. That would be out of the question. How insulting that would be to (current guitarist) Steve Morse, for example? So if that's the stumbling block, fair enough. Never the twain shall meet."

Rolling Stone: Why do you say that?

Gillan: "I'm saying what I'm about to say not to wind Ritchie up, if he's reading this. He knows that we've got to talk about these things. So I say this with no rancor, and let's get the record straight: I was just as much of an asshole as Ritchie was. But Ritchie carried it on for a little longer. Had Ritchie stayed with the band, it would have been all over. It would have just ended. Without any doubt in anyone's mind – it was all over. So the day he walked out was the day we had to rebuild. We had Joe Satriani for one year, and he got us over the crisis, and then we got Steve and started to rebuild. Within a couple of years, we started playing arenas again, and it's been fantastic ever since."

On April 3rd, 1975 the Mk III line-up of Deep Purple - guitarist Ritchie Blackmore, frontman David Coverdale, bassist/vocalist Glenn Hughes, keyboard player Jon Lord and drummer Ian Paice - performed at the Liebenauer ice rink, located on the outskirts of mountain-cradled Graz, Austria’s second largest city after Vienna. Enthused by Deep Purple’s arrival in town, the local press dubbed the concert “das Rockereignis des Jahres [the rock event of the year]”. And it was - in more ways than one. Previously unreleased in its entirety, Graz 1975 - will be released in North America on September 23th on earMUSIC / Eagle Rock Entertainment.

After Graz, Deep Purple would play just two more shows - in Saarbrücken, Germany and Paris, France - before Blackmore left to form his new band, Rainbow. The remaining band members would regroup quickly with American guitarist Tommy Bolin in tow. In order to preserve Blackmore’s final run of Mk III concerts for posterity, Deep Purple’s managers had brought the Rolling Stones mobile recording studio over to mainland Europe. And what a show it was! Graz 1975 is absolutely electrifying and exhilarating. Indeed, it has long been regarded as the holy grail of concert recordings among Mk III connoisseurs. A performance that has never been available in its entirety until now.

Kicking off with a blazing performance of “Burn”. Graz 1975 is a wild eight-track ride, firing on all pistons. Blackmore plays with controlled brutality. The vocal interplay between Coverdale and Hughes has never sounded so good. And, of course, stalwarts Lord and Paice give it a good kicking - and then some. The tracklisting, naturally, is weighted heavily in favor of Mk III recordings, with just two songs from Deep Purple’s previous incarnation with Ian Gillan on vocals and Roger Glover on bass: the iconic “Smoke On The Water” and the almost-as-iconic “Space Truckin’”. Still, it’s true to say that, from beginning to end, Graz 1975 showcases Deep Purple Mk III at the absolute top - and also, ironically, at the end - of their game. After almost 40 years the concert is still captivating. It is the perfect example that, for Deep Purple, there is no need for extravagant video projections or expensive fire shows to play a unique and fascinating gig. All they need is their music. It is the love and passion for their music that makes every single show a unique experience.