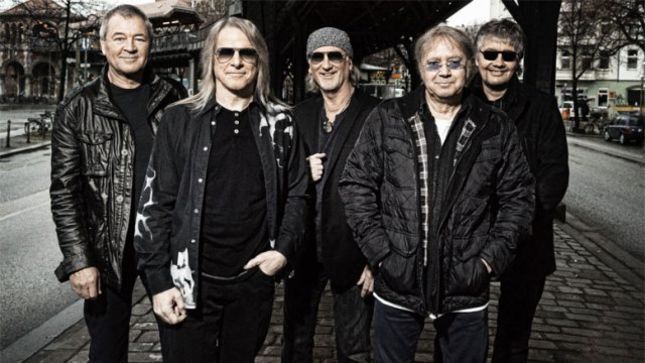 Steve Morse, guitarist for rock legends Deep Purple, recently spoke with Billboard about the band's latest album, Infinite, and The Long Goodbye Tour, scheduled to play at least 65 dates around Europe, North America and South America. Following is an excerpt from the interview.

Q: Ritchie Blackmore has mentioned his interest in playing one last show with the band. How do you feel about that?

Morse: "Well, he's one of the founding members of Deep Purple. Fans would love it. It would be nice, I think, to see closure with everybody involved, and the bad feelings put aside. I think they'd all get a kick out of it if they could get past the psychological barriers. I am a fan of music, I'm a musician. I am not a politician.

Now, a lot of people would feel intimidated, to have somebody come who's likely to play over them, standing in front of them and stealing the spotlight or whatever. But I thought, a lot of people would love to see this. And at the Rock and Roll Hall of Fame, I thought Ritchie Blackmore was going to show up. He could've played three songs, but I ended up doing them, because he didn't. That was up in the air.

There have been a lot of bad things said and done amongst the guys, and anyhow, it is like the ice has to be broken. I think that once that's done, they'd all have a great time. But I don't know how to go about doing that. Anyway, as far as I am concerned, all members, past and present and future (laughs) of Deep Purple, are welcome."

Deep Purple co-founder Ritchie Blackmore, who last played with the band in 1993, was recently interviewed by German website Rock N Roll Reporter. During their chat, Blackmore said he would be willing to reunite with Deep Purple for one final show.

According to Blackmore, "I think if they would be interested and our schedules would not collide, I would be available for a single show - for nostalgic reasons. But I do not think Deep Purple are interested. They have their niche and are not into doing thigs like that. We are friends and I've been making my music now for 20 years, and they've been doing their stuff for 20 years. It's probably not likely (to happen). Some management would not like it, even if we were only interested in a single show. Their management would not allow it, I'm sure."

Read more (in German) at this location.

On August 4th, earMUSIC released Deep Purple - From The Setting Sun (In Wacken)… To The Rising Sun (In Tokyo) on Blu-ray, numbered and limited to 10,000 copies. For the very first time you get both shows in one high-quality package - a real collector's item.

You can now watch Deep Purple's incredible live performance of “Smoke On The Water” (featuring Uli Jon Roth) from Wacken Open Air 2013. Check it out below and pre-order the Blu-ray at this location.