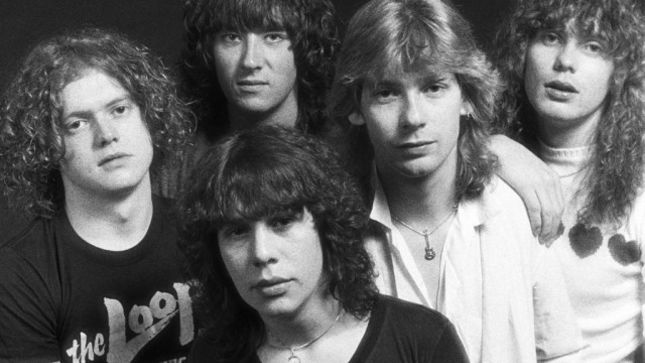 Speaking with the UK's Express, Def Leppard frontman Joe Elliott discussed co-founding guitarist Pete Willis (pictured front) and his contribution to the band's legacy. Willis was fired in July 1982 due to his excessive drinking and was replaced by current guitarist Phil Collen.

Elliott: "When we got inducted into the Rock And Roll Hall Of Fame (in 2019), we tried to get him to come. He deserved to get his credit. He was very integral and we wanted him to know that he was very, very welcome to come sit at our table and be up on that stage receiving his award. So one of my closest friends in Sheffield, his sister is married to Pete, so I can always get a message to him. But he wanted to talk to the guys from the Hall of Fame, so we hooked that up."

Elliott compared Willis to one of NASA’s Apollo program rockets.

"The bottom part is jettisoned and then is no longer needed, but is very important to the launch. And that’s what Pete was. He was an integral part of this band. He was the guy who got me in. He chose a different path and we always wish him well at the end of the day."

Willis performed on three Def Leppard albums: On Through the Night (1980), High 'N' Dry (1981), and Pyromania (1983). He was let go during the recording sessions for Pyromania due to excessive alcohol abuse, but his rhythm guitar tracks appear on all songs