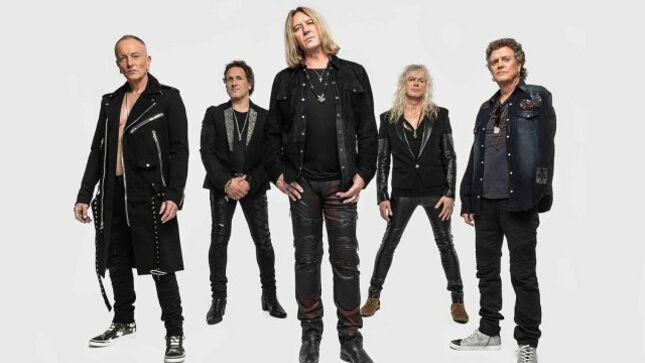 Def Leppard guitarist Phil Collen guested on the Jeremy White Podcast to talk about the band's Vault, a virtual museum featuring hundreds of memorabilia pieces spanning the bands entire history, which gets launched today (January 13th). Collen also commented on The Stadium Tour, which was put on hold due to the ongoing global pandemic, and does a deep dive into the recording process and sounds of the Hysteria album.

Collen: "It's a digital museum, and it's actually going to be a physical museum at some point. We've been raiding our closets and collecting all this stuff we thought had disappeared, like a guitar strap that was used in the 'Pyromania' video. Stuff like that: clothes, amplifiers. It's amazing the amount of stuff we've got between us. Whenever we go on tour again we may have it so that people can go and visit it as well."

Sign up now at LeppardVault.com to unlock the Def Leppard Vault on January 13th. Check out the following preview:

The Def Leppard Vault is the first ever collection of the band's artifacts and related stories, curated from and told by Joe, Sav, Rick, Phil and Viv. The Def Leppard Vault will serve as a constantly curated museum, including special installations where fans can gather to see the band’s history from 1977 to now.

Below is the initial trailer for The Def Leppard Vault: