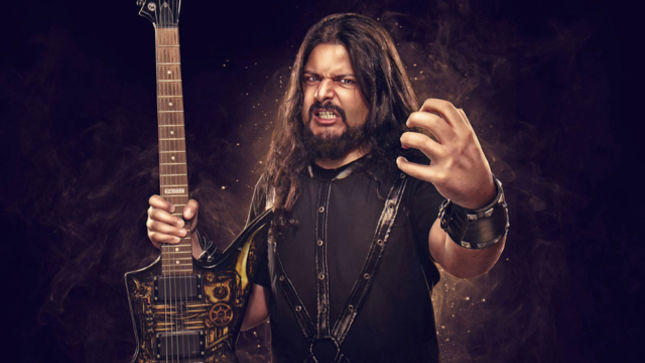 Demonic Resurrection frontman Demonstealer has been hard at work recording his second solo album, which features George Kollias on drums. The album is due for release in early 2016.

Meanwhile he has collaborated with drummer Louis Rando from Impiety, who is based in Australia and is part of various bands there. The track also features a lead guitar solo from Demonic Resurrection axe-man Nishith Hegde who is also part of horror metal band Albatross.

The single is being released independently on October 2nd October via his Bandcamp page, as well as on all digital platforms like OKListen, iTunes, Spotify etc. The track has been mixed by Demonstealer himself and mastered by Daniel Kenneth Rego.

The lyrics for the track “Genocidal Leaders”:

The rule of the game is to keep them in fear
An emotionless being, not swayed by tears.
Spill the blood along the way,
To not get caught is the name of the game.
Power, feeding the greed of man
Religion, a controlling master-plan
Diminish, their capacity to think,
Genocide, kill them without fear or remorse
History, rewritten, a bunch of lies
Chaos, nowhere to run or nowhere to hide
Slaughter, the innocent caught in your game
Lust, hungry for money, power and fame.
Ruthless. Tyrant. Mass Murderer. Profiteer.
Heartless. Souless. Unrepenting genocidal leader
Coward. Bastard. Remorseless. Death Dealer.
Heartless. Souless. Unrepenting genocidal leader
Even a verdict in court can be bought
It’s just a matter before you are caught
Your smiling face won’t erase your crimes
The blood on your body is not mine.