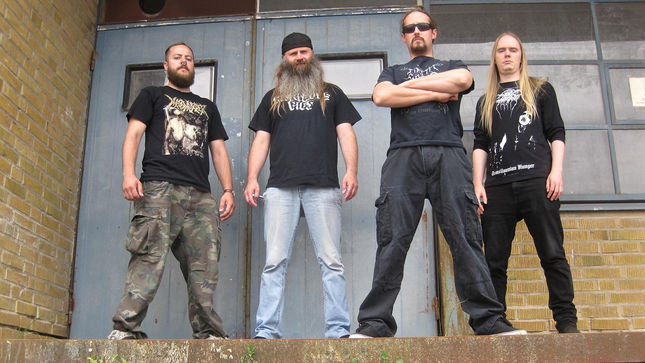 Cult Swedish death metallers Deranged will release a new full-length album, Struck By A Murderous Siege, on October 28th via Agonia Records. It is the band's first studio album in five years, and their ninth altogether, that was recently completed at Berno Studio (Amon Amarth, The Crown, Witchery) in their hometown Malmö. The album's cover artwork is a visiual depiction of its title, and it was created by Mike Hrubovcak (Grave, Six Feet Under, Sinister).

Despite of Deranged's roots, their sound is more associated with American death metal rather than the early 90's Swedish death metal scene they originated from, and can be described as technical and brutal death/grind with several groove influences.

Guitarist/main songwriter Thomas Ahlgren commented on the album: "The new Deranged album, titled Struck By A Murderous Siege is a blend of classical Deranged brutality with a bit of new elements that will fit perfectly both old and new Deranged fans. You can be sure about that! The album, consisting of five fast, grinding and shredding songs and three heavy mid-tempo tunes, will give the listener the most interesting and varied Deranged album so far. Prepare to hear the echoes of serial killers and brutality!"

The successor to Cut Carve Rip Serve from 2011 will feature eight new tracks with a playing time of roughly 40 minutes.

Struck By A Murderous Siege will be available in:

Pre-orders are available at this location.