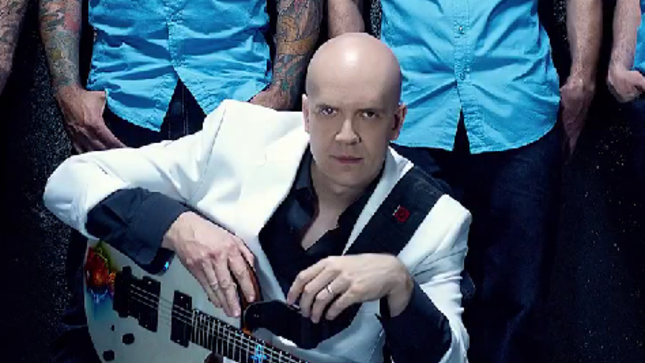 Ultimate-Guitar.com recently caught up with Townsend for a massive career-spanning interview, tracing his history from his Noisescapes album through Steve Vai, Strapping Young Lad, the Devin Townsend Band, and his current Devin Townsend Project. An excerpt from the interview is available below:

UG: In 2003, you made the Strapping Young Lad album, which was the first SYL album since City. It was a brutal album you made in response to 9/11?

Townsend: "You know what? It wasn't a response to 9/11 specifically as much as that's how it got spun at the time. It was a response to me being uncomfortable with not being cool anymore. I think when I was doing City, I got so freaked out by the music because I thought, 'Man, this is destructive shit. This is not what I want to represent. It's too much.'"

UG: Did you think you had gone too far with some of the imagery and lyric content?

"I thought this was a way for me to passively get away with it and it isn't. It's plain as balls on a tall dog to everybody else. So when it came time to do this everybody was like, 'Hey, Strapping's really cool' and I'm like, 'Yeah, I know. Right?' And I was like, 'But what I really wanna do is this Devin Townsend Band. Accelerated Evolution is where I'm headed.' They're like, 'But do Strapping and there's tours with Meshuggah and we can do all this stuff.' So I was like, 'OK.'"

Townsend: "I just totally phoned that in so we were all promoting a record I was just like, 'Ah, god. I don't even think this record turned out well' (laughs). Because I put all this effort into Accelerated Evolution, it was an awkward time. And both those records are - even though there's a lot of power in that Strapping record based on the participation of the other guys and even though there's a lot of emotion in the Devin Townsend Band Accelerated Evolution record, both of 'em are kind of bland to me. Maybe not conceptually in what they represent but that whole period was just a watery blue and kind of a washed-out red."