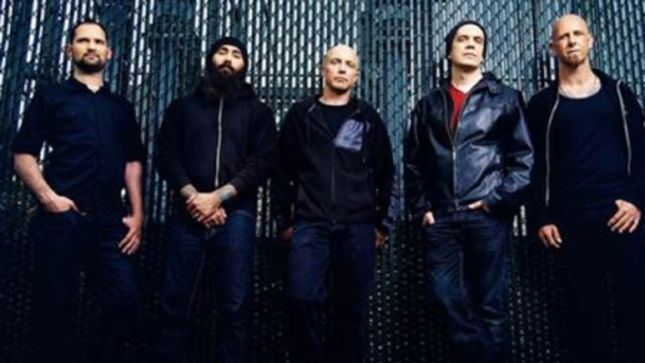 The Devin Townsend Project has issued the following message to the fans:

"If you use the Periscope app, then you should be following @dvntownsend, @rvanpoederooyan, and @mikestjean. They have been broadcasting live from the studio as the DTP record the next album, Transcendence! Check it out using Periscope.tv."

In addition, drummer Ryan van Poederooyen has checked in with the following update:

"Tracked over half the new DTP album the first day in the studio. Will finish it today. It's sounding KILLER! All smiles. Been averaging about 1 hr and 15 mins tracking each song. Anywhere from 2-4 takes a song and then we comp each tune into a master version. We took our time in between takes and made sure the tuning of my kit was perfect. It's been a very enjoyable process. Adam Noll is killing it behind the board and I'm doing my thing on drums as best as I can RVP style."

Ryan Meehan at First Order Historians recently caught up with Canadian vocalist/guitarist/producer Devin Townsend. Following is an excerpt from the interview.

RM:  In what ways does the music that you are currently working on differ from the material on Z² and Epicloud?  Do you have a certain set of criteria when it comes to evaluating the degree of change that exists on any new project compared to the work you’ve done in the past?

DT: "I need an angle of some sort. An emotional perspective that is clearly articulated, or a tangible thing such as the choir in Epicloud, orchestra on Deconstruction, or something that inspires momentum. Otherwise, it becomes tedious and the tendency is to repeat myself. Transcendence – the new record – is inspired by a desire to change myself in some fundamental ways and the consequent work that went into doing so. Control has often been a hang up of mine rooted in fear, so working through that consciously with the people in my life has been motivating for the artistic angle of this new record."

Townsend will attend a new convention-type event called HeavyCon in London, England for three days starting on Friday, September 30th. Townsend will be speaking in the main auditorium on the Friday, conducting a guitar master-class on the Saturday, and he will unveil some new Devin Townsend Project music together on the Sunday. He will also be signing autographs and meeting fans all throughout the weekend.

Townsend comments: "In a year mainly comprised of writing and preparation for my next few projects, I'm proud to announce my participation at HeavyCon! It will be one of the few trips to the UK this year, so I look forward to meeting with you all there!"