DEVIN TOWNSEND Talks Metal - "I'm Still A Fan; It's Just That The Times In Which I Want To Hear it And Play It Are Much Less Than It Used To Be" 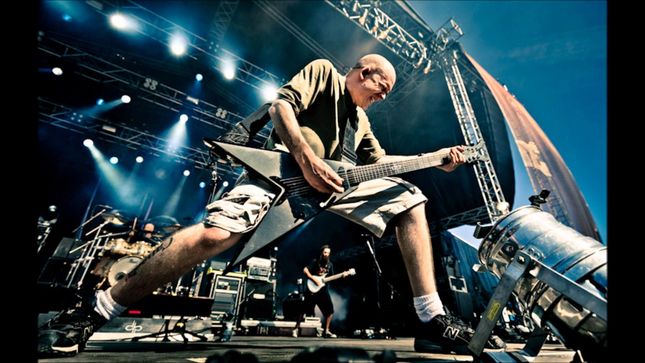 The clip below features a newly released interview with Devin Townsend conducted by RSP TV in 2017. He discusses his present day relationship with metal and bands that retains the same sound from album to album.

Townsend: "In terms of my relationship to metal, I'm still a fan. I'm just old now, and it's like my desire to fill my world with sound very rarely involves metal. You have to be honest with yourself in that sense, too. There's a fair amount of people that do what I do and maybe claim that they're just as interested in the things that they were interested in when they were young, and I just don't know many people that have managed to sustain the interest for really aggressive things for as long as I've been doing this. But that's not to say that I dislike it; it's just that the times in which I want to hear it and I want to play it are much less than it used to be. Plus, my life is so fucking loud. It's between being in a roaring bus for months, and bands, and interactions with other people, and kids, and life, and gigs, and all this sort of stuff. When I finally get a moment to myself I don't want to hear anything."

Townsend has decided to "take a break" from the Devin Townsend Project. He checks in with the following:

"So after 8 years of touring with DTP, I've decided to take a break from this band and focus on a number of other projects I've been really wanting to do for some time now. The band have been there with me through thick and thin and we've shared some pretty great moments - I can’t say enough good things about them - And in the future, I'm sure we'll work again.

"I have 4 new albums I am currently working on. I am currently in the finishing stages one of the grandest and most overwhelming projects that I have been fortunate to do. It's certainly my favourite DVD release of them all and is a powerful moment, if I can say so myself. Ocean Machine Live In Plovdiv (tentative name) Mixing the orchestras, choirs, the 'by-request' set and the full Ocean Machine album in that magnificent setting has been hugely rewarding. Seeing this spectacle come to life is a testament to this period of work and I can't wait for you to see and hear it.

"Life is short and I have a lot I need to say in some new and different avenues. I will certainly continue to play live in several new ways (starting next year) and I'm excited about some collaborative things that have also come up as well.

"I salute the band, the team, and the audience for allowing us to do what we have done and the patience to accommodate my persistent morphing. As someone who’s music is connected to his personal growth, I feel an obligation to follow this muse wherever it leads. To not do so would be in direct opposition to what it is I have fundamentally done for all these years. Peace and respect." - Devin Townsend.