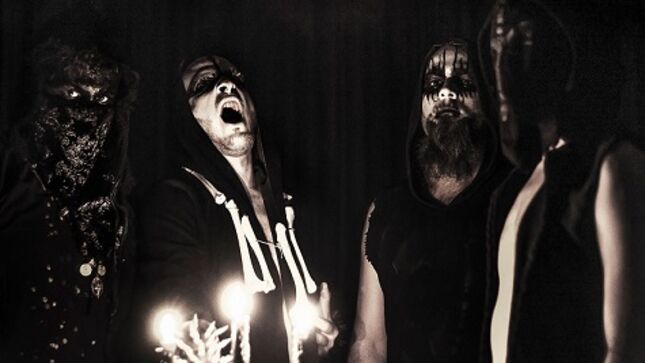 Greek black metallers Diablery have premiered their new video "Sanguine Emissions Of Aeonic Ecstasy". The track is from the band's second album, Candles, set for international release on December 17th via Saturnal Records.

Hailing from Athens, Greece, Diablery was formed in 2008, with guitarist Nimerius and vocalist/guitarist Setesh being the core members of the band. After almost a decade of restlessness and member changes, the lineup was solidified with the additions of bassist XII and drummer Merenhor.

Two years after their birth, Diablery recorded the demo/EP The Catharsis, which was later re-recorded in 2011 as The Eye EP. In 2014, Diablery released their debut album, Architect, which was mixed & mastered by Borge Finstad at Toproom Studio (Norway). In 2017, they honored their alliance with fellow Greeks Shadowcraft with the release of the split EP Entropy, which was mixed & mastered by Setesh at Void of Cosmos studio.

Now, Diablery return with their grandest statement yet: Candles. Simply and elegantly titled, Candles marks both a refinement and rebirth of the Diablery sound. Here, the band eschew some of the more familiar sympho-BM tropes that marked their earlier work for something that, while being still distinctly (and proudly) black metal, aims for a parallel cosmos that's just as awe-inspiring... if not more so! Their physicality bleeds through everything here, sounding very much like a real band, performing together as one entity.

It's an epic album, to be sure, clocking in at 66 minutes, but its forever-surging/winding corridors of nightsky sound and literally breathtaking melody ensure that listening is swift and satisfying. More simply, Candles is a great black metal record that betrays a wealth of imagination within.