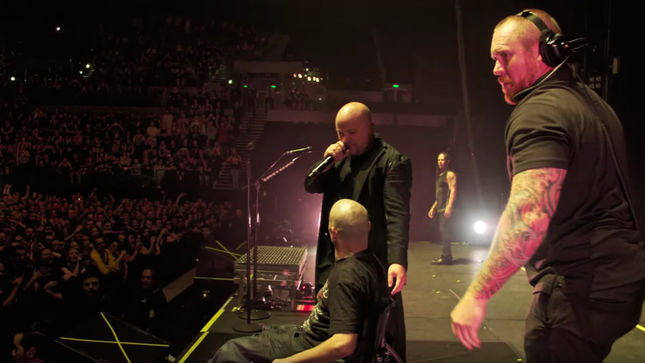 Disturbed have posted a new video from their tour in support of their latest album, Immortalized, available via Reprise Records. In the clip below, frontman David Draiman brings a wheelchair-bound fan in Aukland, New Zealand on stage to enjoy the remainder of the show:

Video footage of Disturbed’s performance of their hit cover of the Simon & Garfunkel classic, “The Sound Of Silence”, on a recent episode of X Factor Australia is streaming below.

David Draiman posted the following via social media: “To those of you saying 'sell outs', or 'what is Disturbed doing on X Factor anyway?'... We're fighting the good fight for our genre to be respectably represented. All rock bands should. All artists/musicians want to spread their work to as many people as possible. That's what it's all about. Sharing the beauty of what you created. If that is considered "selling out" to some people, then so be it.”

Disturbed has released a virtual reality experience for their "The Sound Of Silence" single via Littlstar, the premiere global network dedicated to immersive virtual reality and 360 video. The video was produced by Dekker Dreyer of Clever Fox, and was directed by Matt Mahurin, who also created the visually stunning official video for "The Sound Of Silence" (streaming below) which has accumulated more than 125M YouTube views.

Instructions: If you have a VR headset (Oculus, PlayStation VR, Samsung Gear, or HTC Vive) - please download the Littlstar app from the relevant app stores on each device. "The Sound Of Silence" experience will be front and center once you launch the app.

Disturbed released a new live album, entitled Live At Red Rocks, on November 18th via Warner Bros. Records. The album features songs spanning Disturbed's 20-year-career, including Mainstream Rock chart hits "Down With The Sickness”, "Stricken”, “Inside The Fire”, "Indestructible”, "The Vengeful One”, "The Light," and their now Platinum-certified version of Simon & Garfunkel's classic hit "The Sound Of Silence”. Live At Red Rocks is available for pre-order as of today via all DSPs, and those who pre-order will receive an instant download of the album track "The Light”. Pre-order Live At Red Rocks here.