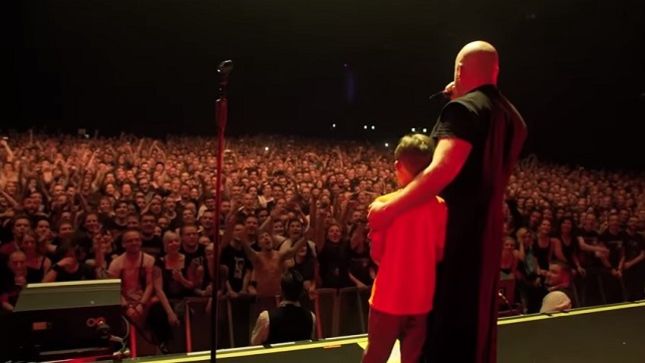 Disturbed has posted two new videos while out on tour. The first video consists of guitar-cam footage of Dan Donegan performing during a show. The second video features the crowd in Luxembourg singing “Happy Birthday” to Donegan’s son Justin, who turned 9 years old.

A message from Dan reads:

“While on tour, there are many things we may miss back home and one of them is family birthdays! I missed my son Justin's 1st birthday back in 2008, as well as a few others!

“I'm very fortunate to have him come out on tour with us in Europe, this time to celebrate his 9th birthday! Thank you Luxembourg for making this a very memorable night for him. This was truly a heart-warming moment for us to share.”

Disturbed performed their haunting take on Simon & Garfunkel's "The Sound Of Silence" on Conan last night. The performance, featuring a 15-person orchestra behind them, was the band's first TV appearance since breaking their 4-year hiatus with the #1 album Immortalized.

Watch the emotional rendition at this location.

Disturbed's Immortalized has boasted three huge #1 hit singles since its release last August, with "The Sound Of Silence" dominating in the #1 spot at Rock Radio for four weeks running now. Immediately upon the video's release back in December, track sales took off and have continued to soar week over week - the single has now sold over 320K copies, making it #1 on the iTunes Rock Chart and #27 on the iTunes overall songs chart, and rapidly rising on the Billboard Hot 100. The video has earned over 27M views and been in the Top 5 iTunes video chart for the past two months, while the song is beginning to earn non-Rock Radio airplay as well, just this week breaking into the Top 40 at Alternative radio.

Disturbed will be on the road for the remainder of 2016, including co-headline runs with Rob Zombie and Breaking Benjamin, as well as headlining slots at major festivals across the US, UK, and Europe. See disturbed1.com/shows for tickets and details on all shows.