DORO - "I’m Still In The Middle Of My Creative Life; I Would Like To Do This Until The Day I Die" 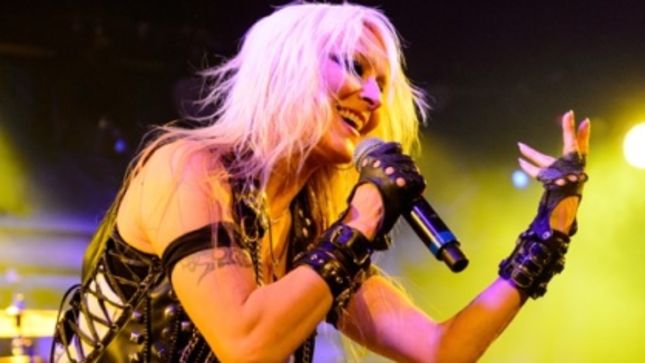 Robert Cavuoto at Metal Rules recently spoke with German metal queen Doro Pesch about her new release, Strong And Proud - 30 Years Of Rock And Metal. Following is an excerpt from the interview.

Robert: With so many bands talking about retirement, is that something you are considering?

Doro: "I would like to do this until the day I die. When God says your time is up I will go, but I want to continue for as long as I can. I want to continue to make records, DVDs and tour. I’m still in the middle of my creative life and the fans still want to hear it and see me. Things are going great and I’m really grateful for all the years of memories. Now I want to give back as I am a supporter of the Wacken Foundation where we support young bands and musicians all over the world. I received so much great support when I started out in the 80s and I want to continue to help others."

Robert: One of the DVDs in the box set is you performing live at Wacken, I have to ask what’s it like playing in front of all those people and does it ever get terrifying?

Doro: "I couldn’t sleep two weeks before the show. I started doing martial arts to help get my mind, body, and soul fit before the show and I still do it now. I thought I was totally ready for the show then went to Wacken and saw Rammstein as he was the headliner one of the nights. They had a big show with pyro and lights, I thought, 'Oh my Gosh' how can I top that? I have to be bigger and better for my 30th Anniversary! I no longer felt prepared as I had been. I called a couple people and someone referred me to a woman that I could talk with to help me relax. I barely knew her, but she was very spiritually. I don’t know where she got this from but she said, 'Your father has always loved and supported you.' I thought about it and he was my biggest fan and best friend who died years ago. When I heard that I became totally focused and felt better, everything was going to be ok. I didn’t have stage fright anymore and we had a great show. When I saw the diehard fans in the front row singing along, it also helped calm me down even more. That’s was the first show of the 30th Anniversary tour."

Three decades of Doro - three unforgettable nights - forever captured on three DVDs and two Blu-rays; including an two-hour plus, great music movie, which delivers deep insights behind the scenes and inside the heart of Doro. Nuclear Blast released this incredible Doro anniversary package on June 24th, Strong And Proud - 30 Years Of Rock And Metal.

Watch “Earthshaker Rock” from the DVD:

Once again, the packaging was drawn by Doro's favorite artist, Geoffrey Gillespie. Strong And Proud - 30 Years Of Rock And Metal will be released in the following formats on June 24th:

Go to this location for tracklist details.

“Raise Your Fist In The Air”:

Doro will hit the road in the US once again later this year, with shows booked for September and October. Her schedule is currently as follows, with more shows to be announced soon.