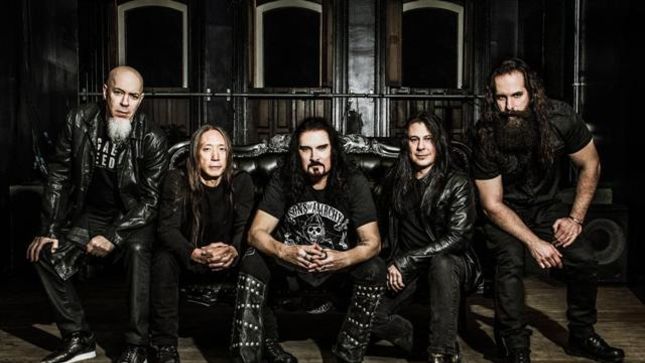 Dream Theater keyboardist Jordan Rudess recently spoke with Lotsofmuzik about his solo career, and the band's forthcoming follow-up to their 2016 album, The Astonishing. Following is an excerpt from the chat.

Q: You have your “day job” with Dream Theater and just finished recording a new album. I saw a picture of you with a Hammond organ in the studio – will you bring it with you on tour, or will you stick with the Korg?

JR: "Yeah, I was playing around with the idea of getting some very cool organ sounds, and I was thinking of all the possibilities, because today in the digital technology world there’s all sorts of ways to achieve an organ sound. But I ended up with the Hammond X5, and I found it to be amazing, really great. I ran it into a device called 'motion device' which is kinda like a Leslie (amplifier) – it moves the sound, spins it around. So eventually I thought I should take this with me because it has a good place in the new album, it has a really powerful sound, and changing things up a little bit would be cool as well."

Q: Some of the most prominent criticisms of the fanbase are about Mike Mangini’s drum sound in the studio and about how difficult The Astonishing was to absorb – were you guys aware of that, and did you discuss it when it came the time to write and record the new album?

JR: "Yeah, I know there were a lot of people who had trouble with the drum sound. Personally I never had a problem with it, I liked it, but I guess everybody’s a critic nowadays, and everybody’s voice is somehow of great importance in the internet world in the safe zone behind a computer [laughs]. I think I understand why some people maybe didn’t like the drum sound, and I’d also say that Mike Mangini wasn’t 100% happy with it either. But I think what’s gonna happen on this album is an amazing drum sound – it’s killer! Again, everybody’s a critic and I’m sure in the end somebody will always find something to say, but for me it’s one of the best drum sounds I’ve ever hear.

As for the second part of your question, Dream Theater has had a very long career, and when it came the time to do the album that turned out to be The Astonishing we wanted to do something that was created a little bit different than usual. We wanted to do a concept album, and John Petrucci and I decided that the best way to do this kind of album was to sit in a room and really write this thing, like a musical or a rock opera, and that’s what we did. We took some very focused time writing all this music, an it’s an album that I’m extremely proud of; it’s one of my proudest achievements with Dream Theater. But I know it was a very polarizing album for the fans, and I think the reason is that Dream Theater fans are varied anyways. You have the guys that like the heavy stuff, while other like the progressive and more melodic stuff – and there’s a lot of different kinds of music within what we do, so it creates this situation. You can’t really please everybody, and in The Astonishing we couldn’t please everybody. A lot of our metal fans kinda dropped off and said 'What the hell are you guys doing with these sweet soft parts?' (laughs). And I get that, that’s fine – you can’t please everybody all the time. But I’m excited because I feel like this new album is going to be a home run. I get it – Dream Theater fans don’t like to go for too long of a gentle ride. Maybe a ballad here and there, but I think the bulk of them are not so into the Disney-esque influence (laughs). We did that and we loved it, we had a great time, it was the biggest production ever. But now the next stage is back to the roots, back to the core of the sound – screaming Hammond organ, killing leads, chunky riffs, slamming drums, and everybody will be there moshing (laughs)!"

"We've finished the drum tracks and I couldn't be happier with them, a great team effort the whole way" - Mike Mangini

"Here’s Mike in the studio recording a short proggy bit from the new album. Yes, that will be the album take and his reward will be some delicious BBQ chicken courtesy of chef JP!:

"It's the first day of drum tracking for the new Dream Theater album here at our remote recording studio hideaway!"

John Petrucci and James LaBrie shared a quick video update from the writing sessions:For a first impression of the studio, watch John’s tour below:Dream Theater is: