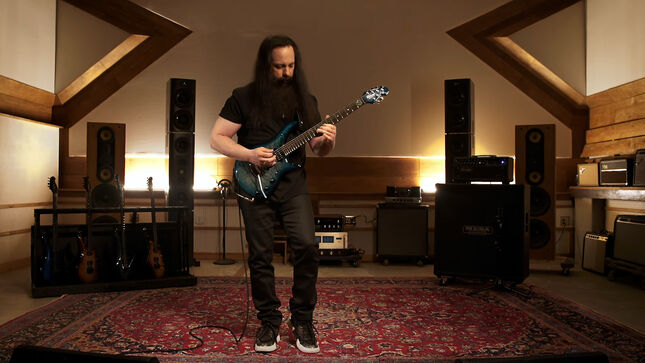 Ernie Ball Music Man and John Petrucci are proud to celebrate a partnership that has lasted for more than two decades, introducing the world to some of the most innovative guitar designs and technology. 2021 marks the 20th anniversary of the John Petrucci line of signature instruments, and to honor this achievement, Ernie Ball Music Man are pleased to announce a custom limited edition 20th anniversary of the Majesty guitar.

The 20th Anniversary Majesty features a flamed maple shield seated in a Honey Butter Burst finished Honduran mahogany body with a glossy translucent finish on the back. This special Majesty is equipped with a load of unique options, including a grain-filled Mahogony neck-thru design, Ebony fretboard with unique gold JP/shield inlays, a combination of gold and black hardware, and a laser-etched anniversary tremolo backplate. The pickups are signature DiMarzio Dreamcatcher (bridge) and Rainmaker (neck) pickups, which, when combined with an onboard piezo bridge system, give the Majesty a focused and highly versatile palette of tones. Available in 6 and 7 string versions, this collectible anniversary guitar comes with an autographed certificate of authenticity and will have a limited ordering window, so make sure to order soon.

Watch below as Petrucci demos his 2021, limited edition Hydrospace Majesty Guitar. The Majesty is the result of John's unwavering demand for high-performance and playability. One of the most well-balanced and innovative instruments available, the Majesty features a neck-through-body design, unparalleled upper fret access, ergonomic in-line control knob placement, and an advanced pickup switching system, which effectively eliminates the delay between pickup selection. The Majesty is the exemplification of everything we know a John Petrucci signature model to be - innovative technology, versatile performance, and a sleek modern feel. The Hydrospace Majesty features an alder body with a quilt maple top, mahogany and flame maple neck, ebony fretboard with unique blue inlays, a matching flame maple headstock, and chrome hardware.

With footage dating back to the early 2000s, this documentary examines the evolution of John Petrucci signature guitar, his relationship with the Ernie Ball Music Man, and features extensive interviews with Petrucci, Sterling Ball, and members of the Ernie Ball Music Man Engineering and Product Development team, who each worked on the first JP guitar design with John and have been an instrumental part of its progression since the beginning.