DREAM THEATER Talk Images And Words 25th Anniversary Tour - "'A Change Of Seasons' Was Supposed To Be On The Album, So It Made Sense To Put It As The Encore" 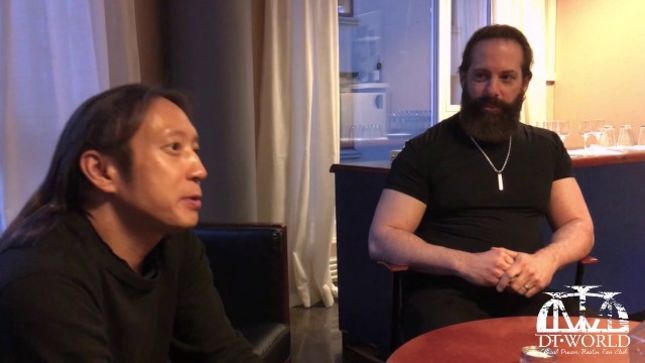 When Dream Theater recently visited Trondheim, Norway on the Images And Words 25th Anniversrary Tour, the the Dream Theater World fanclub got to sit down with founding members John Petrucci (guitar) and John Myung (bass) for an exclusive interview.

Dream Theater vocalist James LaBrie also sat down with the band's DT World fanclub to discuss the 25th anniversary of their breakthorugh album, Images And Words. He also discusses contributing guest vocals to recent albums from Rik Emmett and Last Union. Check out the interview below.

On February 3rd, Dream Theater brought their Images & Words 25th Anniversary tour to the Samsung Hall in Zürich, Switzerland, where they played the classic album in its entirety along with other songs from the band's extensive catalogue. Check out fan-filmed video below.

Act 1:
"The Dark Eternal Night"
"The Bigger Picture"
"Hell's Kitchen"
"The Gift of Music"
"Our New World"
"Portrait of Tracy" (Jaco Pastorius cover - John Myung solo)
"As I Am"
"Breaking All Illusions"

Act 2 (Images and Words):
"Pull Me Under"
"Another Day"
"Take the Time"
"Surrounded"
"Metropolis Pt. 1"
"Under a Glass Moon"
"Wait for Sleep"
"Learning to Live"

Encore:
"A Change of Seasons"