Drummer CHRIS SLADE - “People Say ‘AC/DC Recorded An Album And They’re Going To Be Touring In 2020’... You Know What? They’re Not!" 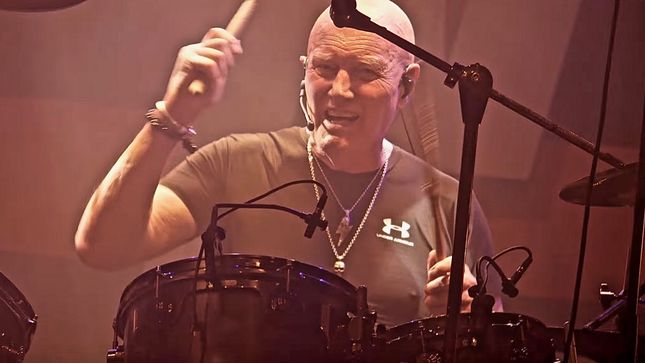 Drummer Chris Slade is featured in an extensive interview with Rolling Stone, in which he discusses performing with Tom Jones, his time in Manfred Mann’s Earth Band and that group hitting #1 in the US with their take on Bruce Springsteen's "Blinded By The Light", playing on the David Gilmour tour in 1984, and of course, AC/DC.

Slade joined AC/DC in 1989, just in time to play on The Razor’s Edge album. He left the group in 1994 when they reconnected with drummer Phil Rudd, but rejoined in 2015 when legal problems forced Rudd to take an extended leave of absence. Slade traveled the world with AC/DC throughout the Rock Or Bust tour of 2015 and 2016, even after vocalist Brian Johnson departed near the end and was replaced by Axl Rose.

An excerpt from the interview follows:

Rolling Stone: Pictures have surfaced showing Brian, Cliff, Angus, and Phil near a recording studio in Vancouver. The fans all think they’ve made a new album. Do you know anything about that?

Chris Slade: "Nope. I don’t at all. To be honest, those pictures are so old. I think it was probably... I don’t know if I was the first drummer to go through Canada. But it looks, to me, like old pictures, to be honest. If you look at the hair on everybody and what the hair is like now, including me, you’ll see what I mean. There are so many rumors about AC/DC. There are daily, and I mean daily, rumors. 'Oh, Angus has bought New Zealand.' It’s ridiculous. 'Oh, I know things because I know. They recorded an album and they’re going to be touring in 2020!' You know what? They’re not [laughs]."

Rolling Stone: I keep reading they are taking old Malcolm riffs and making new songs out of them with Brian singing. That’s the rumor at least.

Slade: "That could happen. We all know about technology. I’m certain that Malcolm and Angus talked in great depth about this before he passed and before he was really, seriously ill. I’m sure there was a master plan. Of course, you throw away plans. Plan A turns into Plan Z. Personally, my gut feeling is that Angus is not going to retire. There could quite possibly be another album. I’m pretty certain there will be. Who is on it? I have no idea. Will Cliff come out of retirement? Who knows? If he’s had enough fishing for a while, maybe he’ll want to come back to rock & roll."

Rolling Stone: I’m looking at their Wikipedia page as we speak, and it lists you as their current drummer. Do you think that’s accurate?

Slade: "To my absolute knowledge, and this is me being absolutely honest, I am the current drummer in AC/DC. [Laughs] It may sound deluded to some people. I’ve said that before in interviews and people have gone, “The man is deluded. He’s lost it. He doesn’t know what he’s talking about.” It actually says that? I’ve never looked."