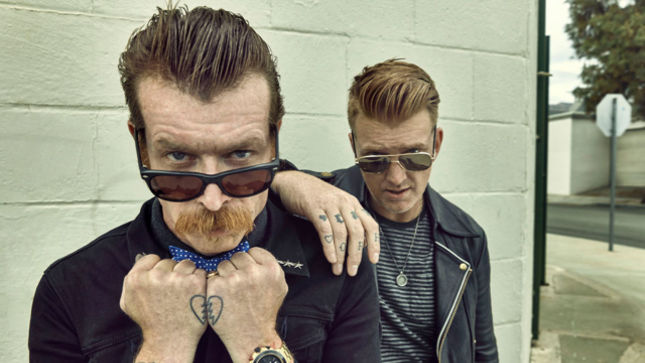 DailyMail.co.uk are reporting that Islamist terrorists shouted 'Where are the Yanks?' as they targeted the lead singer of American rock bank Eagles Of Death Metal, it emerged today.

Chilling details of the attempted assassination of Jesse Hughes, 43, emerged as investigators continued to examine evidence from the Paris attacks of November 13th, in which 130 people died across the French capital. By far the worst loss of life was at the Bataclan music venue, where Hughes and his band were performing in front of a 1,000 plus crowd.

Three suicide bombers working for Islamic State killed 90 of them with their Kalashnikov assault rifles, and also by detonating their explosive belts. Now, according to information from the judicial enquiry into the carnage leaked to the Figaro newspaper, Hughes was in their gun sights.

Just after the Eagles, from Palm Spring, California, ran off the stage, one of the killers shouted: 'Where's the singer? Where are the Yanks?' He then started playing a discarded xylophone, as other members of the ISIS cell searched for Hughes and his bandmates.

Hughes, who is nicknamed 'The Devil', is a passionate supporter of gun ownership in the US, and has controversial far right views on a range of subjects. In a film called 'The Redemption Of Te Devil' released just before the attacks, the devout Christian threatens physical violence against anyone who opposes America's Second Amendment, which protects the right to 'keep and bear arms'.